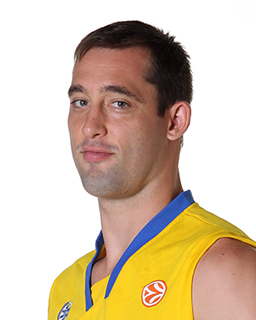 Maccabi Electra Tel Aviv returned to their usual excellent form Sunday night, on their way to a crushing defeat of Hapoel Jerusalem, 107 – 66, at Nokia Arena.
Chuck Eidson and David Blu (20 points apiece), and Doron Perkins (with a dazzling triple double) were outstanding, as was Milan Mačvan, whose 14 points included 2 three-pointers.

Lior Eliyahu, Guy Pnini, Eidson, Sofoklis Schortsanitis, and Perkins started the game for Maccabi, while Dion Dowell, Jason Rich, Sam Clancy, Yogev Ohayon, and Yuval Naimy did the honors for Hapoel.
The opening minutes of the game were close, with Maccabi taking their first lead of the game, 5 – 4, off a three pointer from Pnini on the right wing.
Naimy and company fought hard, retaking the lead until two from the foul line by Eidson put Maccabi back on top 9 – 8 after three and a half minutes.
Again Hapoel responded, until a dunk from Sofo (assist Eliyahu), a drive in the lane by Eliyahu and free throws from Pargo gave Maccabi their biggest lead so far, 17 – 13.
It wasn’t enough, though, as Jerusalem came rushing back, retaking the lead off points by Moshe Mizrahi.
The quarter ended with the visitors clinging to the slimmest of leads, 20 – 19.

Sofo kicked off the second quarter with a huge block on Clancy, which translated on the other end to a Pargo-licious layup that put Maccabi back on top 21 - 20, this time for good.
David Blu followed that with a slick reverse layup, while Maccabi’s demon defense was back in force, keeping Hapoel away from the basket for the first two minutes of the period.
Points by Naimy were answered by Eidson with a three-point catch and shoot that put Maccabi up 27 – 22.
The visitors wormed their way back into the game, pulling within one at the halfway mark in the period, but cool heads prevailed for Maccabi, with Perk and Pnini scoring from outside the arc to give the home team some breathing room, 33 – 28.
Eidson dropped in a deuce at the shot clock buzzer, and Blu downed another catch and shoot to make it 37 – 30 with two and a half minutes left in the half, forcing Hapoel head coach Oded Katash to call a time out.
The pause didn’t help Jerusalem much, as Mačvan dropped in a smooth three from the top of the arc, kicking off an 8 – 0 scoring run for Maccabi in the final minutes of the period that also included excellent defense, which forced a turnover and ended in a rebound/coast to coast dunk and one by Eidson, which brought the score to 48 – 32.
Pnini (assist Perk) scored as time ran out on the half, sending the teams to the locker room with the score 50 – 34.

Hapoel looked better at the start of the second half, but it wasn’t enough.
Nearly every shot made by the visitors was answered by Maccabi, and after three minutes a drive by Blu set the score at 56 – 43.
Eidson was electrifying on defense, harassing shooters and breaking up passes.
Points from the charity stripe by Mačvan (who was 100% from the line) and Pargo made it a fifteen point lead, but an and-one from Naimy chipped away at that gap.
Balance was restored with another catch and shoot from Blu (assist Pargo).
Another three from the versatile Mačvan made it 68 – 52 with just over a minute and a half left in the period.
Points from Eidson and Richard Hendrix in the final minute were joined by a bucket at the buzzer by Mačvan off a slick fake-turned-assist by Perkins, making it 74 – 59.

Eliyahu and Mačvan got things started in the fourth quarter with four quick points that made it a 19 point game, 78 –
59.
Lior Hakmon narrowed the gap slightly, but a shot from downtown by Eidson, followed by a dunk from Eliyahu, showed the visitors how it was going to be in the final period of the game.
A three by Naimy were the last points Hapoel scored for the next three and a half minutes; Maccabi’s superior defense worked in tandem with a blazing offense, which went on a 14 – 0 scoring run that included huge back-to-back threes by Blu and Pnini, a hook shot by Sofo and points by Eidson, who had an incredible night.
The run was capped off by points from Pnini (assist Perk), making it 97 – 64 with four minutes left in the game.
Blu’s fade-away from the corner put Maccabi on the brink of the century mark, 99 – 66, and Sofo took them over with two from the line.
Will Solomon sent Perk to the line for the last piece needed to complete his triple double with less than two minutes remaining.
Blu dropped in another fade-away (assist Pnini) and the sweetest of victories was made even tastier when the final points of the game, a perfect stop and pop from outside the arc, were delivered by none other than beloved team captain Derrick Sharp.
Final result, a satisfying 107 – 66 rout over Hapoel Jerusalem.