18/12/2018
Maccabi Origins: Derrick Sharp
A Winner, A Captain, A Legend, Derrick Sharp wore the yellow and blue jersey for 15 seasons and while doing so he made the most memorable miracle happen
Read more >

22/11/2018
Two teams, three coaches, two wins and one Obradovic
With a former red coach becomes a member of the yellow and blue tradition it's time to remember two great games one for coach and one for the team that happens to involve coach Zeljko Obradovic
Read more >

08/11/2018
The story of two EuroLeague powerhouses and their D'Or Fischer
The 2010/11 season was very special in all sorts of ways, from having the a breath taking backcourt to making it to the final four and one D'Or Fischer who just wore the yellow jersey the year before
Read more >

25/10/2018
The Raging Elite 3
Throughout the history of the EuroLeague only two clubs completed a three-peat, six won back to back, and of those six only three came close to a three-peat, this is the story of Maccabi's quest for eternal glory
Read more >

15/10/2018
One stop just before going back to the top
The 2006/07 EuroLeague season might not have been the smoothest sail through per say for Maccabi, but the game that was played on the 5th night of April will forever be told
Read more >

10/10/2018
Threepeat - When it rains, it pours
With the paths of two of Europe's finest clubs intertwined, it comes as no surprise when we say ladies and gentleman it is time to get ready for a trip down memory lane and reminisce a period of finals and semifinals in green, blue and yellow
Read more >

06/09/2018
The First Ever
The 40th anniversary to the first game between a European team and a NBA squad is here. Guess who won
Read more >

31/05/2018
An Ongoing Series
With the NBA Finals series being moments away from its tipoff, here are five focal points from Maccabi's previous encounters against teams from the best league in the world and the milestones achieved along the way
Read more >

13/05/2015
Nefesh B'Nefesh Honors Tal Brody
Yesterday, Tal Brody received a lifetime achievement award from Nefesh B'Nefesh, the organization that works to promote aliyah and integration to Israeli society of Jews from North America and other English speaking countries, for his contributions to their efforts.
Read more >

12/01/2014
Sims and Daniel Enshrined in Maccabi’s Hall of Fame
In a moving ceremony at Nokia Arena before the Euroleague Top 16 game against Lokomotiv Kuban, former Maccabi greats Willie Sims and Moti Daniel were inducted into the club’s Hall of Fame.
Read more >

02/01/2014
Galatasaray – Maccabi’s 100th Opponent in Europe
Tonight (Thursday) Maccabi Electra Tel Aviv will hit a major milestone, facing their 100th opponent in Europe, when they take on Galatasaray Liv Hospital Istanbul of Turkey, against whom they have never played, in the first game of the 2014 Euroleague Top 16.
Read more >

18/04/2013
Perry and Williams Inducted into Maccabi’s HOF
Maccabi Electra Tel Aviv held a ceremony Tuesday night before the Euroleague game against Real Madrid, honoring two great players from the club’s past: Aulcie Perry and Earl Williams. In a moving ceremony, the two were inducted into the Maccabi Tel Aviv Hall of Fame.
Read more > 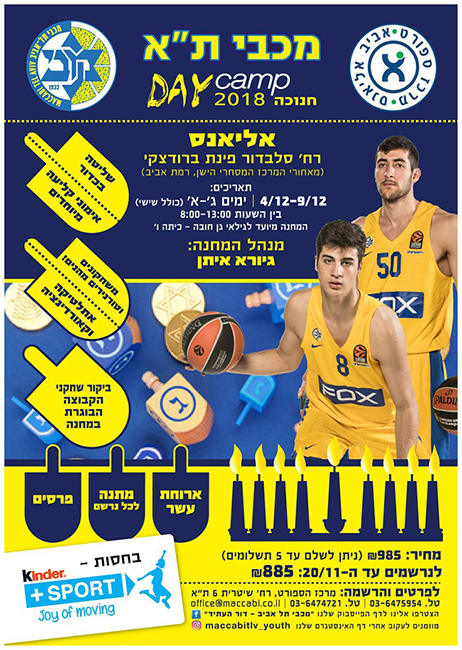