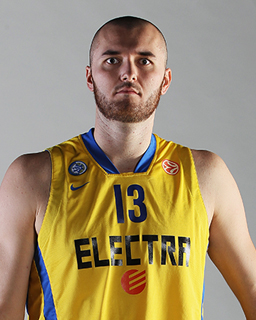 It was an easy win for Maccabi Electra Tel Aviv in their second round Adriatic League game against Slovenian team Zlatorog Laško. Sofo (18 points, 9 rebounds), Eliyahu (18 points) and Pnini (12 points) were the leading scorers for Maccabi. David Blu did not suit up.

Maccabi Electra Tel Aviv wrapped up their Slovenian road trip with a 2 – 0 record after handily beating both of their opponents in the first two rounds of the Adriatic League. Monday night's game was a 101 – 72 rout of Zlatorog Laško which came about largely as a result of 80% shooting from the field. Head coach David Blatt continued to utilize his complete rotation, as is fitting at this stage of the season, and enjoyed an 18 point, 9 rebound performance from big man Sofoklis Schortsanitis. Lior Eliyahu scored the same number of points, Guy Pnini added 12, and Devin Smith and Milan Mačvan each contributed 10 points. On Thursday, Maccabi will face Cibona Zagreb in the home opener in Nokia Arena in front of a sell-out crowd of 11,000 fans.

The starting lineup was once again composed of Lior Eliyahu, Yogev Ohayon, Jordan Farmar, Devin Smith and Sofo Schortsanitis. Two great plays by Smith gave Maccabi a 5 – 0 lead in the first minute of the game. Maccabi's tough defense prevented the Slovenians from jumpstarting their offense, and after three minutes the visitors led 11 – 5 after points by Sofo. Theo Papaloukas came into the game for his first official minutes as a Maccabi player, Shawn James made two huge blocks, and Pnini scored from the foul line to make it a 23 – 12 game with three minutes left in the period. Mačvan scored a three from the right side, Papaloukas added a layup, and the quarter was topped off by a steal plus coast-to-coast layup by Pnini. At the end of ten minutes, Maccabi led 35 – 19.

Sofo, Eliyahu, and team captain Tal Burstein scored in the early minutes of the second quarter to put Maccabi up 42 – 20 after three and a half minutes. Maccabi's iron-clad defense kept the Slovenians to only one point in the first five and a half minutes of the period, until Grega Mali scored for Zlatorog from three point range to make it 45 – 23. Meanwhile, Richard Hendrix came into the game and made his presence felt with a quick block, two rebounds, and three points. Two Farmar to Eliyahu plays put the score at 52 – 23 with less than three minutes left in the half. The Slovenians managed to offer up some offense in the closing minutes of the period, and the teams went into the halftime break with the score 54 – 31.

Maccabi's excellent defense had returned in force by the start of the third period, while Eliyahu and Farmar combined to make it 60 – 31 in 5the first two minutes. Eliyahu went on to score Maccabi's next five points, then dished to Sofo for the bucket (which was soon followed by a dunk by the big man). Halfway through the quarter the score was 69 – 36. Sofo continued to do as he pleased in the paint, and what pleased him was to score baskets. Pnini added points on a fast-break pass from Burstein and Farmar added two more; with two minutes remaining in the period Maccabi led by a score of 78 – 40. The hosts managed to tally another eight points, but at the end of the third period the score was 81 – 48, Maccabi.

It took until the fourth quarter, but the Slovenian's mustered up some more offense to outscore Maccabi 8 – 0 in the early minutes of the period. Shawn James (assist Pnini) stopped the run, then Pnini added a three pointer from the right wing, Mačvan served up a pretty spinning hook shot, and Ohayon contributed a steal plus layup to make it 90 – 58 with six minutes left in the game. Hendrix showed off his mid-range jump shot, then he and Mačvan proceeded to score all the remaining points for Maccabi in the game, including a fast-break layup from Mačvan, and a dunk by Hendrix (off a no-look dish from Ohayon). In the end, Maccabi Electra Tel Aviv handily defeated Zlatorog Laško 101 – 72.