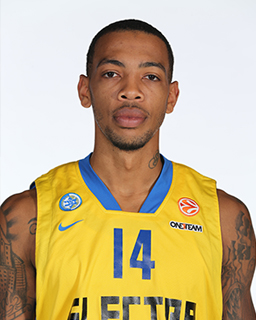 Maccabi Electra Tel Aviv defeated Maccabi Ashdod 104-72 in Week 10 of the Israeli Winner Sal League. Devin Smith led four scorers in double figures with 22 points off 6 of 10 shooting from three point range. Lior Eliyahu added 21 points and 7 rebounds, and David Logan contributed 19 points on 5 of 7 shooting from downtown. Nik Caner-Medley, who is injured, did not play. Moran Roth's minutes in the game were limited due to illness.

Starters were Devin Smith, Ricky Hickman, Yogev Ohayon, team captain Lior Eliyahu and Malcolm Thomas. The game got started off points from Smith and Eliyahu, and after four and a half minutes Maccabi had taken an 11-7 lead. But the visitors battled back, taking a 13-11 lead a minute later. Smith and company put the kabosh on that, with trey by Smith on the right corner, and a layup and 1 by Hickman. Logan's bomb from the left wing at the 24 second buzzer made it 20-13 Maccabi with three and a half minutes left in the period. Ohayon added a three pointer of his own, and points from the foul line for Sylven Landesberg and Shawn James ended the quarter with the score 27-21.

Smith also kicked off the scoring for Maccabi at the start of the second quarter. He was soon joined by Eliyahu and Ohayon. A tomahawk slam by Thomas off a dish from Hickman made it 35-28 with four minutes gone. Maccabi's defense put a choke-hold on Ashdod, who did not score for the next four minutes. Meanwhile, the home team sailed to a twenty point lead off great moves and points by Eliyahu, Logan (layup and dunk), James, and Hickman (a three from the left wing), 48-28 with just over two minutes left in the half. Ashdod managed to score five points in the final minutes, but points from downtown by Smith (assist Ohayon) ended the half with Maccabi leading 53-33.

This time it was Thomas who opened the scoring in the early seconds of the quarter, but Smith soon made his presence felt with two more buckets from downtown. Tomas added a putback and points from the charity stripe, while James battled along the baseline for a layup. Yet another trey by Smith made it 69-45 with about four minutes left in the period. A stop and pop by Logan and several points by Eliyahu gave Maccabi a 78-51 lead at the end of the third quarter.

The fourth quarter was more of the same, with Maccabi dominating on both ends of the court. After three and a half minutes the score was 88-56. Logan drilled his second long three of the period and Landesberg and Eliyahu added points in the paint to make it 96-58 near the halfway mark. The home team hit the century mark on points rom the foul line by Thomas, 101-66 with two and a half minutes left. With less experienced players Itay Segev and Ido Zalmanson in the game, Ashdod was able to put some points on the board, but another huge three from Logan sealed the deal, and Maccabi Electra Tel Aviv walked away with a 104-72 win over Maccabi Yachad Habonim Ashdod.