Coach Veljko Perovic, who have worked closely with Deni Avdija for the last 4 years, is talking about the beginnings, challenges and greatest virtues of his young padawan

16/11/2020
HOME · Youth · "Deni radiates optimism around"
Veljko Perovic, until recently an assistant coach at Maccabi Playtika Tel Aviv, is the man who have worked most closely with Deni Avdija in the last 4 years. Setting goals, creating tactics and running with the young talent from the age of 15 all the way to the NBA draft.

When did you begin to work with Deni Avdija?
"I came to Maccabi from Split. I joined Split when Mladen Sestan invited me to be part of Vujcic Academy that was integral part of the club. When Nikola became Sports Director of Maccabi, the ownership of the club expressed interest for cooperation. Avi ,Dani and Nikola came to Split, we came to Israel also few times during the year so we could understand the involvement for developing young players".

"Maccabi at that time wanted to build a system and then strategy for developing players for the Euroleague. Players that would be raised and then promoted to the senior team. That link was somehow missing at the moment. We reached an agreement very quickly, and we had clear goals".

"With Deni I started working four years ago", recalls Perovic. "There was talented generation formed by Sestan and Oded Shalom. They formed heterogeneous selection around Deni from the most talented players of three age groups (2000-2). When Sestan left to the USA, Oded Shalom brought me to work with him and continue the path that they already set".


Do you remember the first times you met Deni? Can you tell us a story that tells us who he was as a kid?
"I remember that I first saw him playing the game with U13 team of Maccabi. I knew he had great genes. His father is a very known basketball player in ex-Yugoslavia. When I saw Deni it was obvious that he was a late bloomer. He looked two years younger then everyone else and had shorts up to his chest".

"I very much believe in early morning practices", Perovic explains. "So he was a kid and it was not easy to wake up in the morning. First few months of working together I didn’t give him the ball. He needed to accomplish some other tasks before. To learn how to take care of his body. So at first he came to the court ,kids were practicing and I put him on the mat. A lot of times he would even fall asleep. I insisted him coming every day. He started completing tasks, was treating himself as he should so we also started with basketball". 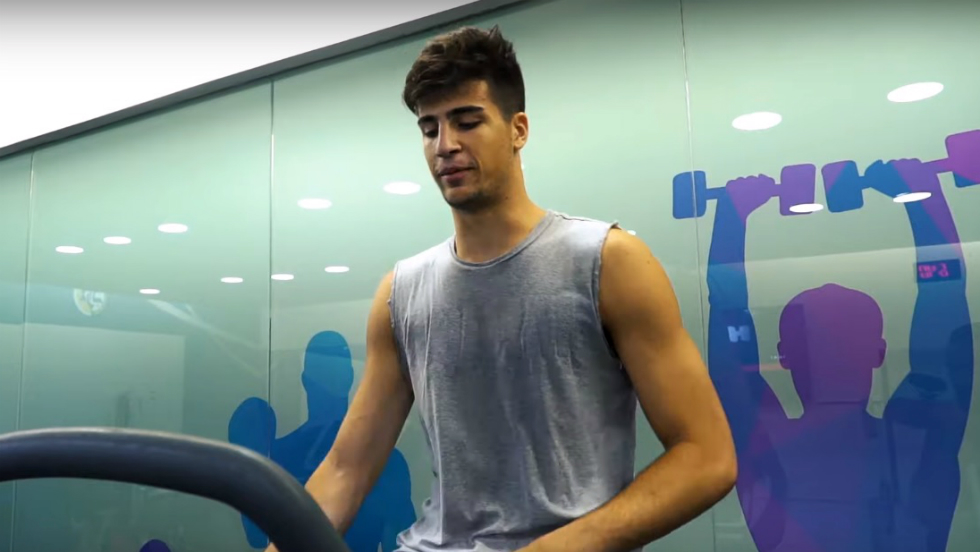 What were the primary goals you have set for Deni? What were aiming for?
"With Deni I had simple early goals and that was to teach him to take care of his body, clean body posture and running mechanics. One of the first signs that someone is really talented is the measure of development in time. He was developing and is developing daily and I also needed to keep up and I am still trying. I never limit. My mission is to brake barriers so no limits can be put on potential. He was developing at his pace - the only right pace for each individual. The only goal I have for him is to be happy and passionate in everything he does. Then everything will be possibble".

In the recent years you have become his personal coach. How did your day looked like?
"Schedule is to work everyday like a bee on the things you were born to do. No-one can measure time of practice of any great professional athlete and also Deni. He was practicing every day to wake up at 6:30. You need to practice this, it is not easy. Then to go to school around 10 and keep attention in the classroom. Practice is to practice yourself to eat the right food all the time, to think right thougths, to talk to the right people, to make right decisions and sacrifices and to do it when outcome is unknown".

"This day in, day out demands practice. And it can not be measured in time. To come home tired in the evening and be so tired that you can eat everything mother prepared like a small wolf, and immediately go to sleep, not knowing what you did that day. But if you have right people around, you feel that you did something good and useful for yourself. He practiced himself into what he is today, trusted his surroundings and we also didn’t disappoint".

"the Maccabi system for developing young players is set and working"


Why was Maccabi the best place for him and others to grow as players?
"Maccabi is one of the best 20 basketball organizations in the world with the NBA teams included. Army of Yellow fans and history that is unique. To see a Maccabi Euroleague game is an experience. Maccabi spirit is something no other franchise in the world has. And knowing that one day fans could cheer your name is a dream come true. The club in its core is people. System is a group of experts that achieve goals together in the way that every individual gives his full contribution in the part he does best. And the Maccabi system for developing young players is set and working. It gives the best condition for players to achieve great basketball standards".

What is so special about Deni? What makes him such a prospect?
"He has great desire to compete, win and develop. It is easy to be around him. Very outgoing. When he comes to locker room he can sense if someone doesn’t feel good that days, and he is always there to cheer him up and support. Sometimes he is childish and playful and he makes jokes on others and also he can accept when someone jokes on his behalf. He is a good friend and young man. I think that all players in the draft are talented, but you want to be surrounded by positive and optimist people. And undisputed optimism is the first virtue of a winner. He radiates optimism around, this is his greatest quality that probably sets him apart".

If you have to choose 1-2 tips for a young player who aspires to be great, what will they be?
"I want you to explore and find your talents with the help of your parents and experts. And when you find them, passionately spend time developing them. I want you to have deep focus and enjoy the creativity that is in you, without sense of time. Because if you really love something life will give you many opportunities to accomplish what you want. I wanted to be an NBA player, that was my dream day and night. I found my way how to touch greatest basketball league from a far, in different way, but with great joy. Be passionate about what you do".