Arroyo and Maccabi Take the Air Out of Avellino

A wonderful game for point guard Carlos Arroyo, who led Maccabi to a 90 – 83 victory after a huge third quarter. Arroyo scored 20 points and made 8 assists. Lior Eliyahu and Marcus Brown each scored 15. 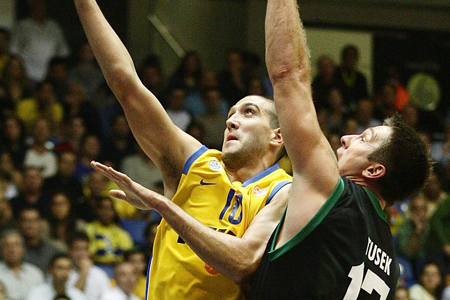 After a disappointing start in Week 1 of the 2008 – 2009 Euroleague season, Maccabi Electra Tel Aviv defeated the Italian team Air Avellino in a thrilling game at Nokia Arena. Carlos Arroyo led the club in a 17 – 0 scoring run in the third quarter, opening a lead that the Italians just couldn’t close.

The game was balanced at the beginning, with the talent of Marcus Brown balancing out scoring by the visitors. After three minutes of play, the score was 6 – 6. Thanks to a three-pointer by Arroyo and Lior Eliyahu’s skill in the paint, Maccabi was soon able to open up a small lead, but Avellino managed to shrink the lead after a basket plus foul by their center, the meaty Eric Williams. With four minutes left in the game, the score stood at 13 – 12 to Maccabi. Fantastic minutes by Arroyo (10 points in the quarter) featuring deadly offensive strikes, successful penetrations and shots from outside the paint brought Maccabi its biggest lead of the game yet, and closed out the quarter with the score 26 – 19.

As the second quarter got underway, the Italians closed the gap with a three-pointer by Drake Diener, but great minutes by Tre Simmons, including a basket and a fantastic assist to Eliyahu, erased any doubts people might have had about the player, and brought the score to 30 – 22 three minutes into the second quarter. As the quarter went on, Maccabi’s offense seemed to weaken. A lack of concentration by the home team allowed Avellino to narrow their deficit to 30 – 28, and then 35 – 33, just minutes before the end of the half. Tal Burstein’s return to the court helped Maccabi get things together, and thanks to flagrant fouls called against Diener and Tamar Slay, Maccabi’s lead stood at 41 – 37 with a minute and a half left in the quarter. A basket and foul for Simmons put Maccabi up 45 – 39 at the half.

The Maccabi players came out of the locker room to start the third quarter with fire in their eyes. Arroyo brilliantly fed the ball to his teammates, Brown fired off two from outside the arc, the fans rocked the arena, and Maccabi exploded with a 17 – 0 scoring run against the overmatched Avellino. Four minutes into the second half, Maccabi had coasted to a stunning 62 – 39 lead. Forward Chris Warren was the only player for the Italian team to continue functioning normally, but his points were like drops in a bucket compared to the flood of baskets by Maccabi. A three-pointer by Marko Tusek and a nice one-on-one play by Williams finished out the quarter, bringing the score to 73 – 54 with Maccabi leading.

Brown and Omri Casspi added to Maccabi’s lead at the start of the fourth quarter with one three pointer each, continuing the pattern begun in the previous quarter. Brown brought the score to 83 – 59 after four minutes of play in the quarter. In response, Avellino opened up a streak of three-pointers in a last-ditch attempt to get back into the game. A barrage of unanswered three-pointers by Warren and Diener took the visitors on an 11 – 0 scoring run, bringing the score to 80 – 73 with four minutes left in the game. Maccabi head coach Efy Birenboim changed his plan of taking his stars out to rest, and put Arroyo and Eliyahu back in the game when he realized his lead was dwindling before his eyes. It seemed that Maccabi was feeling the pressure, and couldn’t recreate the dazzle they had generated in the previous quarter. Another three-pointer by Slay and a basket from Warren brought Maccabi’s lead below 10 points, 89 – 80 with a minute and a half left in the game. Avellino kept fighting and came within seven, but time ran out for them and Maccabi Electra Tel Aviv emerged victorious, 90 – 83.