Lior Eliyahu played the game of his life (24 points and 17 rebounds) to lead Maccabi Electra Tel Aviv to an 88 – 83 victory over Cibona Zagreb in Week 6 of Euroleague play. 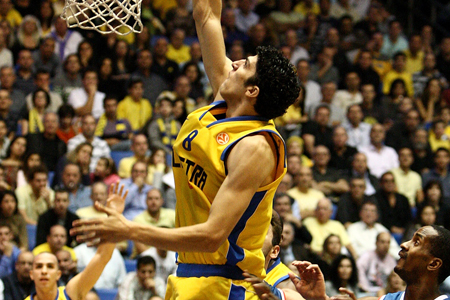 Maccabi started out slow against the tough Cibona defense, until baskets by Brown and Fischer gave the home team an 8 - 3 lead three and a half minutes into the first quarter.
Cibona started to close the lead, but some good minutes for Maccabi were followed by a technical foul for Nikola Prkacin (who ended up with a total of three fouls in the first quarter) helped Maccabi break away.
An 8 – 0 scoring run brought the score to 17 – 7 for Maccabi with 4 minutes left in the quarter.
In spite of some missed shots and troubles with defensive rebounding, Maccabi hung on to a ten point lead until the end of the quarter, which ended with the score 29 – 19.

Tight defense and some acrobatic plays by Eliyahu swelled Maccabi’s lead to 37 – 23 three minutes into the second quarter.
A third foul called against Arroyo put him on the bench, and the Croatians took advantage, closing their deficit to 41 – 35 with three and a half minutes left in the half.
A time-out called by Gershon didn’t help, and Cibona continued to close in.
Only Eliyahu continued to play effectively, scoring 15 points in the first half of the game.
A basket by the forward set the score at 45 – 39 a minute before halftime.
A three-pointer by Vukusic closed out the half with the score 45 – 42, Maccabi.

The break must have recharged Maccabi’s batteries; their offense in the second half was intense.
Points by Fischer, Brown and Tal Burstein, who had 6 straight points in the third quarter, gave Maccabi a 7 – 0 run and took the score up to 59 – 47, three minutes into the third quarter.
Cibona kept coming, and a three-pointer by Kus narrowed Maccabi’s lead to 59 – 54.
Arroyo made sure they didn’t come closer, throwing fabulous assists (including one no-look, behind the back pass) to bring the lead back up to ten, 68 – 56, with three minutes left in the quarter.
The Croatians continued to fight, with Prkacin driving into the paint and Calloway scoring from outside, and the quarter ended with Cibona down by only 2, 69 – 67.

Maccabi had trouble responding to Prkacin’s post-up game, and he scored early in the final quarter to bring the game to a 69 – 69 tie. A lack of defensive rebounds by Maccabi enabled the visitors to take the lead, 73 – 69, two minutes into the quarter.
Maccabi tightened up on defense, and some excellent playing by Brown enabled Maccabi to retake the lead, 77 – 74 with four minutes left in the game.
Eliyahu continued to demonstrate his considerable talent, scoring and drawing a foul on Vukusic to bring the score to 81 – 78 with a minute and a half left in the game.
The nail-biting crowd would spend the remaining time on their feet, watching anxiously as Prkacin scored a three-pointer.
But a drive to the basket by Arroyo, plus an enormous defensive rebound and basket at the other end by Eliyahu brought the score to 84 – 81 with thirty seconds left in the game.

Cibona refused to give up, and the game turned into a nerve-wracking duel of foul shots in the final seconds.
Kus closed the gap to one point, but Brown scored two free throws to give Maccabi an 86 – 83 lead with fifteen seconds left.
Calloway missed a three-pointer that could have tied the game, and Burstein delivered the coup de grace from the foul line.
Maccabi racked up an important win, by a lead bigger than the defeat in Cibona in Week 1, and handed the Croatians their second loss of the season, 88 – 83.