Marcus Brown Leads Maccabi to a Big Win in Italy

Maccabi Electra Tel Aviv is almost guaranteed to make the Top 16 thanks to their first away victory in the Euroleague this season, 86 – 72 against Air Avellino. Marcus Brown led the team with 26 points; Eliyahu, Fischer and Green also had huge games. 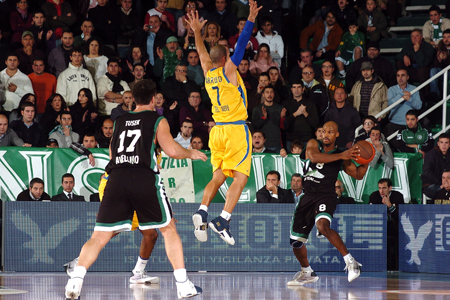 scored a three-pointer for in the opening minute of the game, but excellent play by Fischer and Green gave Maccabi a 7 – 3 lead two minutes into the quarter.
Maccabi gave their hosts a free hand from outside the arc, and took advantage, tying the score at minutes of play.
Lior Eliyahu’s entrance into the game changed the momentum; his 7 straight points helped put Maccabi back in the lead, 22 – 16 with a minute left in the quarter.
Two missed shots by Arroyo were answered with baskets by Diener and Antonio Porta, and the quarter ended with Maccabi holding on to a slim 22 – 20 lead.

The second quarter started off badly for Maccabi, with missed shots and turnovers.
Fortunately, the Italians were similarly disorganized, and Maccabi was able to maintain their lead, 26 – 23 two minutes into the period.
The game continued to seesaw, with Maccabi playing well, then less so; Arroyo, who had a rare off-night, missed shots and made some bad calls, while Avellino scored several three-pointers, tying the score 32 – 32 with four minutes left in the half.
With Dror Hagag in as point guard, the Israeli’s offense looked to Fischer and Green, who brought Maccabi’s lead up to 42 – 37 with a minute left.
Hagag made full use of the time remaining, engineering a steal and two assists (one of which led to team captain Derrick Sharp scoring his first three-pointer in Euroleague play this season), and the half ended with Maccabi up by 8, 48 – 40.

Eliyahu and Green scored early in the third quarter, giving Maccabi their first double-digit lead of the game, 54 – 44, three minutes into the second half.
While Arroyo continued to struggle, almost everything Eliyahu put up found the basket, keeping Maccabi in the lead.
With four and a half minutes left in the quarter, Brown scored from outside the arc, bringing the score to 61 – 47 and leading to call a time out.
Maccabi came out slow after the break, and the hosts were able to close the lead to 10, 64 – 54 with a minute and a half left in the period.
A basket by Best dropped Maccabi’s lead back to a single digit at the buzzer, 65 – 56.

A three-pointer and a basket off a fast break by Brown started off the fourth quarter just the way Maccabi like it.
Fischer joined in the fun with a basket from near the top of the key, and the pair brought Maccabi’s lead up to 72 – 58, forcing the coach to call another time out.
Maccabi was hampered by Arroyo’s bad night, and after five minutes of play in the fourth period had chipped away at Maccabi’s comfortable lead, 72 – 62.
Maccabi was able to maintain their double digit lead, however; with three minutes left in the game, the score stood at 76 – 66.
Gershon put Hagag back in for the remainder of the game, and an all-Israeli five took care of business, giving Maccabi a vital win - their first away victory in the Euroleague this season, 86 – 72.