In the sixth round of Winner League play, Maccabi Electra Tel Aviv defeated Ironi Ashkelon, 99 – 75. Arroyo was outstanding with 22 points and 10 assists. (Photos by Roi Idan) 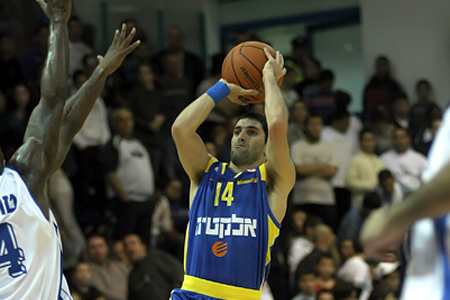 Maccabi opened the game with clear instructions from head coach Pini Gershon – get the ball into the paint.
Fischer and company had no trouble obliging, and with three minutes gone in the first quarter had taken an 8 – 4 lead.
also had a strong man under the basket, Turner, who helped close the gap and, with a three-pointer from Eitan, came to a 12 – 12 tie after five minutes of play.
Fast breaks by Maccabi, fueled by Arroyo with excellent passing, took Maccabi on a 9 – 0 scoring run and bringing the score to 21 – 12 with three minutes left in the quarter.
A time-out called by Ashkelon head coach Adi Azoulay only brought the beleaguered hosts temporary relief, just until Arroyo returned to the game and sent his teammates flying with slam dunks that finished off the first quarter with a 28 – 19 Maccabi lead at the end of the first quarter.

Four three-pointers by Maccabi opened the second quarter, taking the score up to 41 – minutes.
Maccabi kept up the pace, scoring a total of seven straight shots from outside the arc, and the score had flown to 47 – 23 three minutes into the quarter.
Maccabi played smoothly and nearly flawlessly, while looked ineffective and disorganized.
With three minutes left in the half, Maccabi’s lead had swollen to 30 points after a basket by Omri Casspi.
Maccabi slowed things down as the half drew to a close, and headed to the locker room at the break having scored 62 points in the first two quarters of the game – a score not seen at Maccabi since the days of…Pini Gershon.
62 – 36 to Maccabi at the half.
Fischer was injured during the second quarter and did not return to the game.

The second half opened with a three-pointer by Maccabi’s team captain Derrick Sharp, and set the tone for most of the quarter.
A dunk by Tal Burstein set the score at 71 – minutes of play.
Maccabi eased up the pressure on defense enough to allow Turner and his teammates to go on a 9 – 0 scoring run and close the gap to 71 – 51 with three minutes left in the quarter.
Maccabi went long minutes without scoring, until Arroyo broke the drought with a three-pointer that gave Maccabi some breathing space.
Two more shots from outside the arc, by Dror Hagag and Arroyo, ruined all of ’s work during the quarter, and Maccabi finished the third quarter leading 82 – 57.

Dror Hagag took his turn, scoring a three pointer and feeing an assist to Yaniv Green while serving in the point guard position, to open the fourth quarter and taking Maccabi to an 87 – 57 lead.
Ashkelon succeeded in closing the gap a little, but Maccabi continued to play exciting basketball; an alley-oop pass from Hagag to Jason Williams brought Maccabi’s lead to 93 – 66 with five minutes left in the game.
The rest of the game resembled an easy-going practice rather than a league game, with both teams easing back.
All that remained for the hosts was to try and close the gap as much as possible, and for Maccabi to enjoy the fruits of their efforts.
Final score, Maccabi Electra Tel Aviv 99, 75.

“I haven’t missed the disgusting shouts and the other things that just don’t need to happen,” concluded Maccabi head coach Pini Gershon after his first Israeli league game in a number of years.
“You need to support your own team, not curse the rival team.
I’ve said that over and over but it doesn’t help.
I know that we had more possessions and that we played the game at our own pace, and I also see the weak points.
There are things that need to be fixed, as regards the players and various other elements, but you can’t change those things in a couple of days.
It’s a process.
I decided before the game that (Esteban) Batista and (Tre) Simmons wouldn’t play.
It’s impossible for three players to play the same position.”

“Sharon Drucker will be arriving soon.
He’s already helped me the last few days, as a friend,” said the coach about his new assistant, who has signed with Maccabi for the next two and a half years and who will be at Pini’s side during Thursday night’s Euroleague game.

Marcus Brown said, “We took good passes tonight.
Pini brings a whole new attitude.
He has things he wants to change.
He knows the players, and we respect him and we feel good.”
When asked about the team’s former head coach, Efy Birenboim, Brown replied, “Unfortunately, that’s the nature of things.
Efy is a wonderful coach, and he knows that.
We need to concentrate more and do the best we can.
Confidence is always important, and it was crucial that we win the game tonight, for the future.”