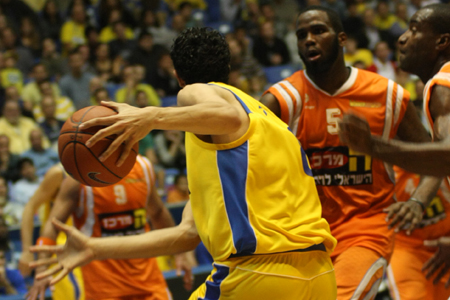 Maccabi took advantage of sloppy defense by Rishon Le- to break away on offense, racking up a 6 – 0 lead early in the first quarter.
The visitors tried to climb out of the deep-freeze, but Casspi and Eliyahu continued to perform impressively and brought Maccabi to a 15 – 7 lead, five minutes into the first quarter.
Rishon Le-Zion couldn’t seem to find the basket, while Maccabi, in several perfectly executed offensive plays, jumped to a 28 – 12 lead with three and a half minutes remaining.
Thrilling three-pointers from Maccabi put the icing on the first quarter cake, and the period ended with Maccabi leading 37 – 17.

Canny player substitutions by head coach Pini Gershon at the start of the second quarter kept Maccabi’s excellent momentum going.
Fabulous play by Yaniv Green, who completely dominated under both baskets, helped Maccabi increase their lead to 47 – and half minutes of play.
It’s unclear whether it was Maccabi’s tough defense, or the ineffectual Rishon Le-Zion offense, but Maccabi cruised without almost any opposition for most of the second quarter. Only a bit of slacking off in the final moments of the half on Maccabi’s part allowed the visitors to close the gap slightly, and the second quarter ended with the score 56 – 37.

Maccabi continued to open their lead at the start of the second half.
Within three and a half minutes from the start of the third quarter, Casspi, with brilliant execution on offense, had led Maccabi on a 12 – 0 run, bringing the score to 68 – 37.
For the remainder of the quarter, Maccabi played superbly, delighting the crowd with sharp offensive plays, seamless change-ups, no-look passes and fantastic assists (not to mention marvelous shooting).
With a minute left in the quarter, Maccabi had opened their lead to over 40 points, and the quarter ended with the score 90 – 50.

In the fourth quarter, as in the previous periods, Pini continued to enjoy the outstanding performances of his Israeli players.
Dror Hagag, who looked to be in excellent shape and enjoyed the full support of the home crowd, executed several fine penetrations to the basket which helped maintain Maccabi’s comfortable lead.
Clearly, the grinning fans loved every minute.
The game ended with Maccabi crushing Rishon Le-Zion, 114 – 75.

After the game, Pini Gershon said, “I don’t have more substitutions; everyone played about 20 minutes, and that’s a good division.
I wanted to let (Esteban) Batista play, but he didn’t show the desire to play.
Lior Eliyahu is a fantastic player; I’m trying to get just a little bit more from him.
It would be pretty tough to get more from this game.
We scored more than a few baskets within five seconds of gaining possession, and that’s an advantage; there were some turnovers from lack of concentration…the players need to learn that they need to play for 40 minutes at the same level of intensity.”

“We’re all satisfied with the way this game went,” continued the head coach.
“Everyone had fun, except for Rishon Le-Zion.
I respect that they put in a good game.
Any team with four foreign players can be dangerous.
Even against traffic cones it’s hard to score 115 points.
At the end of the day, we have to look at our own performance.
We’re off to a good start, and I hope we’ll get better.”

Omri Casspi, who was Maccabi’s leading scorer with 22 points, added, “I didn’t know I had such good percentages.
It’s fun to win, and it gives us a lot of confidence.
It’s possible to take something from this game; we have to play aggressively and play good defense.
We don’t play selfishly; we want to get everyone into the game.”