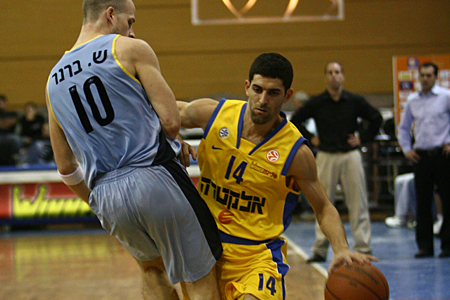 In their easiest game so far this year, Maccabi Electra Tel Aviv routed Ironi Ramat Gan 102 – 56.
Maccabi took the lead from the start and, in effect, the game was over after the first quarter.
Eliyahu and Casspi were standouts.
Now everyone’s thoughts are turned towards Thursday’s game in ; the team flies out of on Tuesday morning.

With no resistance from , Casspi and Eliyahu attacked the basket from the very start of the first quarter, scoring Maccabi’s first twelve points of the game.

After three minutes of play, the score was 12 – 4, Maccabi.
A time-out called by didn’t do them any good, and they continued to provide a pitiful performance on both offense and defense.
With two and a half minutes left in the quarter, Eliyahu and Fischer executed a brilliant play that put Maccabi’s lead at 22 – 9.
Two three-pointers by Arroyo and a splendid show by Fischer (5 rebounds, 3 assists, and 3 blocked shots in the period) were too much for the hosts, and the quarter ended with the score 29 – 11, Maccabi.

seemed to wake up at the start of the second quarter; two three-pointers in the early minutes of the period improved the score from their perspective.
Points by Tal Burstein brought the score to 40 – 21 three minutes into the quarter, but went on an 8 – 0 scoring run to close the game on Maccabi, 40 – 29 with four minutes remaining in the half.
Maccabi head coach Pini Gershon, who had originally planned to rest his star players in the second period, responded to ’s run by returning Eliyahu and Arroyo to the game.

If anyone in thought the second half would bring about a change for the better, they were sadly mistaken.
Maccabi opened the third quarter with an 11 – 0 scoring run, enjoying good minutes from the bench.
They quickly opened a 40 point lead, 73 – 33, after a three-pointer by Tre Simmons five and a half minutes into the second half.
Marcus Fizer also took part in the celebration, scoring his first Israeli league points of the season.
At the end of the quarter, Maccabi led 81 – 42.

Maccabi continued to pulverize in the fourth quarter.
Simmons and Yaniv Green helped bring the score to 93 – minutes of play in the period.
It looked like Maccabi’s lead was just going to continue to grow.
Gershon had nothing much left to do except keep Fizer running and talk strategy for Thursday’s game with his assistant coach.
A three-pointer by Chen Zigdon for at the buzzer did nothing to change the magnitude of Maccabi’s victory.
Final score: 102 – 56.

Top scorers for : Lee and Myles 13 points each; Helms 10 points.