Maccabi Electra Tel Aviv defeated Maccabi Haifa Heat in a close game, after a great final quarter – especially on defense - put them on top to stay. The draw for the Euroleague Top 16 takes place Monday at 1 p.m. CET. 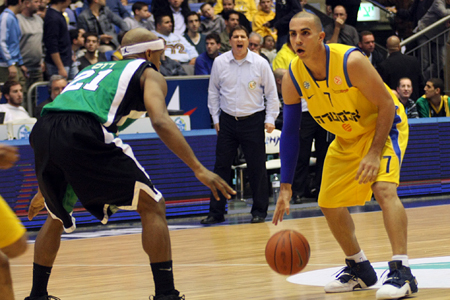 Without Tal Burstein, who was sick, and Marcus Fizer who didn’t play, Maccabi Electra Tel Aviv defeated the Haifa Heat 80 – 68.
The victory came after three close quarters and an excellent final period in which the team succeeded in freezing out the Heat, holding them to only 10 points.

Right from the opening minutes, the game showed signs of being a close contest.
Two three-pointers by Perkins were answered by points from Fischer off two alley-oop passes, bringing the score to 7 – 6 Maccabi with three and a half minutes elapsed from the clock.
The visitors began to feel more and more at home as the period progressed; a series of baskets without a single miss, plus a steal and fast break, put them ahead 17 – 11 with three minutes remaining.

Maccabi looked to be having some difficulty on both offense and defense during those minutes, until brilliant teamwork between Casspi and Eliyahu helped Maccabi close the gap, 19 – 15.
Then Davon Jefferson and Kozikaro scored to put the visitors up 22 – 16 at the end of the first quarter.

Maccabi opened strong in the second quarter, with a post-up by Brown on Gur Porat helping to bring the home team within one point, 26 – 25 three minutes into the period.
A bucket from outside the arc by Arroyo started a 7 – 0 scoring run for Maccabi, bringing the score to 33 – 30 with four and a half minutes remaining in the half.
didn’t give up, though, and managed to tie the score off a three-pointer by Porat.
Two successful plays by Tre Simmons and Arroyo combined for a total of 5 unanswered points, and Maccabi led 40 – 35 at the half.

The visitors dominated the early minutes of the second half, scoring 7 points to Maccabi’s 3 and closing the gap to 43 – minutes of play.
Most of the Maccabi players were not playing to the best of their abilities, yet the team maintained a lead thanks to excellence on the part of big men Yaniv Green and Fischer, who scored points and were terrific on defense under the basket.
Maccabi raised their lead to 5, but a wide-open Sales scored three from the corner to bring that lead down to 55 – 53, with three minutes left in the period.

Maccabi was unable to stop Perkins, who was on fire for most of the game.
The guard took the game into his own hands and single-handedly brought the lead back to with a three-pointer at the end of the quarter, 58 – 57.

An exciting battle started heating up in the opening minutes of the final quarter.
Maccabi answered ’s skillful playing with the muscularity of Green on defense and a brilliant three-pointer by Arroyo to tie the score at 62, two and a half minutes into the fourth period.
With the tension in the arena at its peak, Maccabi began to dominate the game with effective offense, taking full advantage of every possession on their way to an 8 – 0 scoring run, to reach their highest lead of the game thus far, 70 – 62 with four and a half minutes remaining on the clock.
head coach Avi Ashkenazi saw the game slipping through his fingers and called a time-out; instructing his team to shoot from three whenever possible, as a last-ditch attempt to salvage a win.

Ashkenazi’s efforts failed, and the game got away from his team in spite of everything, especially once Perkins, ’s most effective player in the game, fouled out.
The Heat had no remaining tools to recover control of the game, and all that remained was for Brown and company to seal the deal.
Maccabi team captain Derrick Sharp put the finishing touch on the game with a three pointer from the corner, giving Maccabi an 80 – 68 victory.

After the game, Maccabi head coach Pini Gershon said, “You also need to know how to win games like this one.
I’m not used to calling a time-out in the final minutes of the game; the fact that I did shows how much I respect .
Lior Eliyahu turned over more than a few balls.
I told the players that they have to show that they have better defensive skills.”
When asked about the upcoming Euroleague draw, Gershon replied, “Top 16?
Whatever God wants to give us is good.”

Top scorer Marcus Brown had this to say: “We’ve got six games before we can reach the Final Four, and we’re going to try our best.
The important thing is to keep our home advantage, and to get rid of the bad taste left by our loss in .”

Avi Ashkenazi, ’s head coach, said, “We wanted to keep Maccabi to 70 points, because we knew it would be very hard for us to score 80 here at Nokia.
I’m disappointed by the loss; we definitely could have played better.
I don’t think the problem was defense, but rather the choice of shots on offense.
Perkins is a great player who is having an excellent season.”