In the opening game of Round Two in Winner League play, Maccabi Electra Tel Aviv overwhelmed Hapoel Galil/Gilboa 87 – 64. D’or Fischer was dazzling with 16 points and 6 blocks. 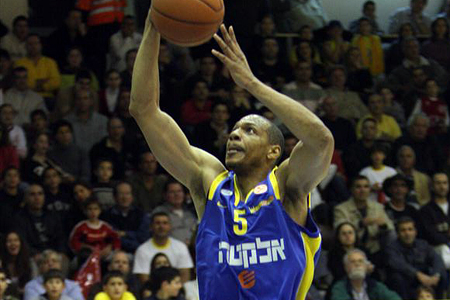 After a couple of hesitant offensive drives, it was Fischer and Eliyahu who broke the ice, scoring Maccabi’s first points in the game.
Arroyo also found his hot hand, and together they took Maccabi to an early 9 – 4 lead, after four minutes of play.
The hosts tried to climb out of the deep freeze, and managed to chip away at Maccabi’s lead, but excellent defense by the men in yellow lead to fast breaks and points, and Maccabi’s lead had grown to 15 – 6 with four minutes remaining in the period.
A run by Maccabi that included three-pointers, fast breaks and tight defense resulted in a 12 – 1 scoring drive that put Maccabi up 27 – 8 at the end of a very successful first quarter.

Galil/Gilboa came back at the start of the second quarter, outscoring Maccabi 8 – 1 and narrowing the lead to 28 – 16 three minutes into the period.
Maccabi head coach Pini Gershon sent Dee Brown into the game early in the quarter, and that, together with points scored by Arroyo and Tal Burstein, helped Maccabi regain control of the game, leading 33 – 19 with four minutes left in the half.
Maccabi’s comeback, together with appalling shooting from the free throw line for the hosts, kept the visitors in the lead, while Galil/Gilboa once again found themselves down by a big margin as the end of the quarter approached.
A basket by Burstein was answered by a shot from outside the arc by Roberts, and the half ended with Maccabi firmly in the lead 40 – 26.

It was Maccabi who started strong in the third period.
Two quick buckets by Marcus Brown opened the quarter, and Maccabi soon found themselves on the upside of a 20 point lead, 48 – minutes of play.
Excellent play by Maccabi’s front three, Eliyahu – Casspi – Fischer, kept Maccabi ahead of the hosts in spite of points scored at the other end of the court.
With two and a half minutes remaining in the period, Eliyahu scored from the foul line to take Maccabi’s lead to 60 – 38.
Marcus Brown, who found the basket from all over the court, scored at the end of the period, taking the score to 64 – 40.

As the fourth quarter opened, Maccabi didn’t need to do much but protect their lead for the next ten minutes, but three straight turnovers by Yaniv Green drove Gershon to replace him with Charles Gaines, who made his first appearance for Maccabi.
The hosts, who had been heaving three-pointers at the basket since the start of the quarter, finally started making them and pulled within fourteen, 71 – 57 with five minutes left in the game.
Galil/Gilboa looked like they were headed back into the game, but Burstein nailed a shot from downtown and Gaines sank a follow-up bucket after an offensive rebound to put the lid on any comeback hopes on the part of the hosts.
With two and a half minutes left in the game, Maccabi’s lead had gone back up to twenty: 78 – 58.
Before the game was over, Eliyahu had shown that he, too, knows how to shoot from outside the arc, and Dror Hagag, who had stepped in for Arroyo, lead the team to a strong finish.
Final result: Maccabi 87, Galil/Gilboa 64.

“We’re able to keep teams under 70 points, and that’s okay,” said Maccabi head coach Pini Gershon after the game.
“But there are things that are less good, like turnovers.
We played Gaines and Dee Brown together for too many minutes, so that the game would keep flowing.
Putting one of them in the game at this point is already too much, and disrupts the game.
We need to put them into action slowly.”

About the remainder of the week, Gershon said, “I’m thinking about .
(The game against) seems far away to me.
We’re going to be playing against a tough team that one loss at home can kick them out of the action (in the Euroleague Top 16).
I figure that a club like that, with the players they have, that finds itself with its back against the wall, will fight hard.
We’ll have to reduce to the minimum the number of mistakes we make.”