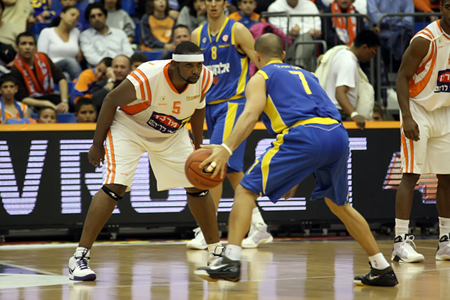 Maccabi opened the game with Lior Eliyahu, Carlos Arroyo, Marcus Brown, Charles Gaines and Omri Casspi, while hosts Rishon Le-Zion started with Gil Mossinzon, Larry O’Bannon, Oded Shaashua, Igor Nesterenko and Bryant Markson.
Tre Simmons did not suit up for Maccabi owing to the rule of having only 13 players on the roster per game.

Maccabi got off to a slow start in the early minutes of the game, and after a few minutes of evenly matched play, the home team was able to take the lead, 6 – 4 three minutes into the quarter.
The game heated up, and even seven straight points by Casspi didn’t put Maccabi in control; Rishon led 14 – 13 with four minutes remaining in the first quarter.
The lead changed hands repeatedly, and points by Arroyo and Brown weren’t enough to stop O’Bannon and Johnson.
The first quarter ended with Rishon Le-Zion in the lead, 27 – 26.

At the start of the second quarter, D’or Fischer made his first appearance on court since his injury three weeks ago, and scored a dunk off an alley-oop pass from Arroyo within 30 seconds.
Maccabi went on a 6 – 0 scoring run but failed to match that kind of performance on defense, allowing the hosts to get back into the game, 35 – 31 to Maccabi with four minutes elapsed in the period.
Maccabi built up some momentum with a three-pointer by Brown and a jumper by McGhee, who made excellent use of his time on the court, giving Maccabi a double-digit lead, 43 – 31 with four minutes left in the half.
Rishon Le-Zion got through Maccabi’s defense to close the gap to five, and the buzzer sounded with Maccabi leading, 50 – 45.

McGhee’s seven straight were the only points Maccabi scored in the first half of the third quarter.
The hosts were likewise cold, and after five minutes of play the score stood at 59 – 52, Maccabi.
Rishon Le-Zion put on the pressure and, despite a three-pointer by Casspi, closed the gap to four, 66 – 62 with two minutes remaining in the period.
Maccabi began having trouble on offense as well as defense, and the home team was able to retake the lead, 68 – 67 with a minute left.
O’Bannon took a defensive rebound coast to coast and the third quarter ended with Rishon Le-Zion in the lead, 70 – 69.

Maccabi continued to struggle at the start of the fourth period, and a shot from outside the arc by Mossinzon gave the hosts a 5 point lead, 76 – 71, two minutes into the final quarter.
Rishon Le-Zion maintained the lead, 80 – 77, while the pressure was building for Maccabi.
A three-pointer from M. Brown after a Maccabi fast break knocked the deficit down to one point, and a subsequent long shot from Arroyo tied the game at 85 with three and a half minutes left in the game.
Arroyo continued to dazzle with his ball-handling skills, and tighter defense by Maccabi combined with points by the excellent Casspi at the other end flipped the score and gave Maccabi a 90 – 88 lead with two minutes on the clock.
Maccabi Electra Tel Aviv showed real character under pressure, increased their lead, and ended the evening with a 96 – 93 victory over Rishon Le-.