In an impressive display of basketball at its best, Maccabi Electra Tel Aviv demolished Hapoel Holon 105 – 82 and closed out the regular season in first place in the league. In the playoffs, Maccabi will face Ashkelon. (Photos by Or Troyner) 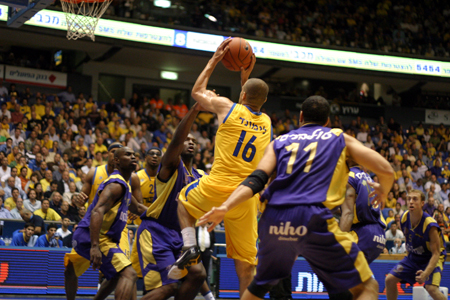 After a tough season in , Maccabi Electra Tel Aviv closed out their regular season in the Israeli league with a decisive victory over Hapoel Holon, 105 – 82 in a display of excellent basketball.
Fischer and Arroyo were the top scorers, while Limonad, Sharp and the Brown duo put on stellar performances.

Next week, Maccabi starts the playoff round and will meet up with eighth-ranked Ironi Ashkelon.
Maccabi holds the home-court advantage in that match-up and will host the first game next week.

Maccabi’s guards were not at their best in the post-up at the start of the first quarter, and three minutes into the game Maccabi was down 8 – 6.
A time-out called by Maccabi head coach Pini Gershon involved some fine-tuning of the offense, and Maccabi came out strong into a scoring run kicked off by points from Casspi and Arroyo.
With three and a half minutes left in the period, Maccabi led 20 – 14.
Holon played well enough in the following minutes to close the gap a little, but fantastic moves by Limonad, including a basket and an assist to Fischer, gave Maccabi a 26 – 20 lead at the end of the quarter.

Maccabi further distanced themselves from Holon at the start of the second quarter with a three-pointer by Arroyo and a lay-up by M. Brown, and after two minutes of play in the period the score was 33 – 22.
The home team dominated the court, displaying talent both offense and defense, and with four minutes remaining until half-time, the score had risen to 43 – 28, Maccabi.

It looked like Maccabi was well on the way to closing the deal, but a string of turnovers and missed shots allowed to re-enter the game.
The visitors went on an 11 – 2 scoring run, during which they scored on every possession.
The half ended with Holon being given a basket scored after the shot clock buzzer had sounded, and the teams headed to the locker rooms with the score 47 – 42, Maccabi.

Maccabi needed only 2 minutes to return to a double-digit lead at the start of the second half, with excellent offense by Limonad and Arroyo putting Maccabi up 53 – 43.
From that point, the rhythm of the game came under the control of Maccabi Electra Tel Aviv, with the home team shutting down Holon’s offense and widening their own lead to 20 off a classic three-pointer by team captain Derrick Sharp, 67 – 47 with four minutes left in the period.
managed to narrow the gap slightly at the close of the quarter, and the teams went into the break between periods with the score 75 – 59 Maccabi.

Maccabi outscored 11 – 2 at the start of the final period, with two more three-pointers from Sharp and another by Arroyo putting the crowd on their feet and the score at 86 – 61.
Holon seemed to recognize that their fate was sealed, and had little more to contribute to the game, while Maccabi kept draining the long shots to leap to a 95 – 74 lead with three minutes left in the game.
Limonad and Green both fouled out after each put his mark on the game, and when the buzzer sounded Maccabi Electra Tel Aviv had crushed Hapoel Holon, 105 – 82.

“Nothing is easy.
In order to win this way, you have to play well,” concluded head coach Pini Gershon.
“We know that every series is a tough one.
We all know that Dynamo Moscow spent an entire season working for a home-court advantage, then lost their first game.
We have to make sure that doesn’t happen to us.”
When asked about his Israeli players, Gershon said, “We have enough players that we don’t have to worry about foul trouble.
I think the coach didn’t give Derrick enough opportunities to play (this season).
You saw Tal (Burstein) and Derrick, and you know the goals.
We have a championship to win, and we have players who have done it before and know what needs to be done now.”

In response to a question about the upcoming playoff series against Ironi Ashkelon, Gershon replied, “We can’t disrespect any team, but let’s not try to create any suspense here.
We’re the better team, and we need to at least get past the first round.”

“It’s always up to us,” said Maccabi’s captain, Derrick Sharp.
“If we play with heart, it makes the game a lot easier.
Our attitude toward the game is crucial.”

Aaron McGhee, who was suspended for a few days last week over breaking training, said, “I was out of practice and didn’t prepare for the game up until a couple of days ago.
I’ve apologized for what happened.
I made a mistake and I’m paying for it.
We’ve got business to take care of here, and that’s to win the championship.”