Maccabi Loses in Nahariya, Is Eliminated from the Israeli Cup

In spite of a promising lead in the second quarter, Maccabi Electra Tel Aviv lost to Ironi Nahariya after a poor second half, and was eliminated in the one-eighth final of the Israeli Cup. Arroyo scored 17 points.

22/12/2008
HOME · News Archive · Maccabi Loses in Nahariya, Is Eliminated from the Israeli Cup 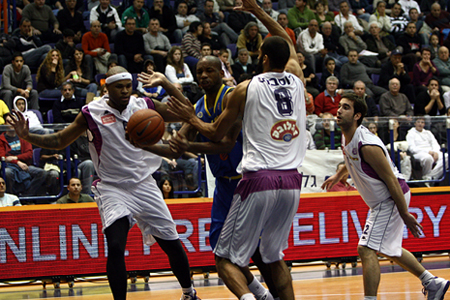 Maccabi Electra Tel Aviv won’t be taking the Israeli Cup this season, after being eliminated in a one-eighth final away game against Ironi Nahariya, 99 – 85.
Although Maccabi was the favorite for most of the first half, a poor showing in the third quarter enabled hosts Nahariya to take control of the game.

Aaron McGhee of Nahariya was the first player to score in the game, after a foul by Yaniv Green and a bit of a sloppy start on offense for Maccabi in the opening minutes of the game.
Maccabi’s first points in the game came two minutes into the quarter, on a basket by Green.
Maccabi took the lead for the first time in the game after a three-pointer by Marcus Brown, 9 – 8.
Maccabi head coach Pini Gershon sent D’or Fischer and Tal Burstein into the game to replace Omri Casspi and Lior Eliyahu, after deciding Maccabi’s offense was too soft.
Ron Lewis scored from the free throw line for Nahariya, putting the score at 14 – 13 to the hosts after six minutes of play in the quarter.

Green was Maccabi’s go-to man in the first quarter (8 points), and he tied the score at 17 with two minutes left.
Fischer had two blocks, and a crucial assist from Carlos Arroyo to Burstein put the cap on an 8 – 0 scoring run.
The quarter ended with Maccabi in the lead, 23 – 19.

The second quarter also got off to a slow start for Maccabi, until Burstein was able to drive to the basket for some important points for the team.
Raviv Limonad was able to tie the score for the hosts, 25 – 25, but a three-pointer by team captain Derrick Sharp and points by Jason Williams put Maccabi back on top, 31 – 27.
A time-out called by Nahariya head coach Yakov Gino worked great for Maccabi, with points scored by Arroyo from the line and a basket plus foul for Green giving Maccabi a 37 – 29 lead after five minutes of play in the period.

Gershon then went with a combination of four Israeli players plus Arroyo, giving Dror Hagag his first minutes in the game, which worked well for Maccabi when he made all three of his free throws off a technical foul by Lewis, giving Maccabi a 44 – 32 lead.
Phil Ricci, who was excellent for Nahariya at the start of the game, racked up his fourth foul even before the end of the half, but an 8 – 0 scoring run by the home team put them back in the game.
A three-pointer by Marcus Brown stopped Nahariya’s momentum, giving Maccabi a 47 – 40 lead with a minute left in the half.
A technical foul called on Arroyo put Nahariya on the line for up to 6 points, which ended up closing the gap to 49 – 45.
Brown missed a shot for three at the buzzer, and the teams headed into the break with the score unchanged.

At the opening of the third quarter, Maccabi again started off slow, allowing the hosts a 5 – 0 scoring run which gave Nahariya the lead, 50 – minutes of play.
Elton Brown came into the game for Maccabi for the first time, and put up the team’s first points in the period three minutes into the quarter.
Maccabi continued to play poorly, with Arroyo called for his third foul and Tony Washam and Limonad taking their team to a 58 – 51 lead.
After a 13 – 2 run by Nahariya, Gershon called a time-out for Maccabi.
Elton Brown hit two free throws, but Maccabi’s defense continued to be lax, and Nahariya’s lead grew to 10, 63 – minutes of play in the third quarter.

Sharp, who scored another three-pointer, and Hagag who replaced Arroyo, tried to get Maccabi back in the game.
Yogev Ohayon, with a nice three-pointer, kept the visitors at a distance, 67 – 58 with a minute left in the period.
A steal by Hagag and a dunk by Fischer closed out the quarter with Nahariya in the lead, 69 – 61.

Fischer and Green whittled Maccabi’s deficit to 4 at the start of the fourth quarter, and a long two-pointer by Arroyo helped considerably, bringing the score to 71 – 68 with seven minutes left in the game.
After a time-out called by Gino, Nahariya hit the court with renewed energy, taking charge of the game and driving the score to 77 – 68 with five minutes remaining on the clock.
A shot from outside the arc by Brown closed the gap to 82 – 76, but he was then called for his fifth foul and left the game with four minutes left.
Missed shots by Eliyahu and Hagag and a turnover by Burstein put the writing on the wall.
A three-pointer by Lewis capped things off, and the game ended in a Nahariya victory, 99 – 85.
For the third year in a row, Maccabi will end the season without an Israeli Cup.

After the game, Maccabi head coach Pini Gershon said, “In the last 23 minutes of the game, they outscored us by 25 points, which really reveals our weaknesses, with all due respect to the good game they played.
But that’s not a reason to lose focus and get called for technicals.
Give them some credit; they’re better than .
Improvement isn’t easy; we’re trying but we don’t want to make the same mistakes as were made at the beginning of the season, changing players just so we can say we changed players, and trying to wipe our consciences clean.
We want players who can help, and we’re looking ahead to bringing players who can do that.”

Lior Eliyahu added, “Maybe the difference is in our level of preparation for this game.
I think that the Israeli league is a good one, not a weak one.
In any event, we shouldn’t lose in a one-eighth final of the Israeli Cup, no matter who we’re playing against; and it’s depressing.”

Omri Casspi said, “I don’t know how to explain this loss.
We looked tired and worn out.
It happens, there’s nothing you can do.
Yogev and Raviv are great players, and Gino is an excellent coach.
We just didn’t play the way we wanted to.”