Maccabi Electra Tel Aviv didn’t give visitors Alba Berlin a chance after the early minutes of the game, defeating them soundly: 96 – 65. Eliyahu and Fischer both had excellent games, and Dee Brown made an impressive first appearance in yellow. 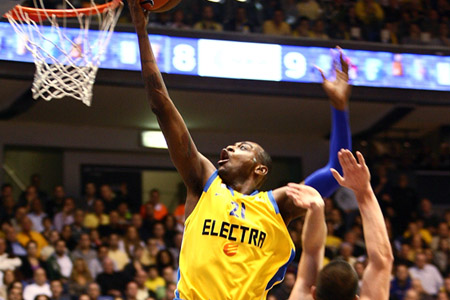 Maccabi Electra Tel Aviv couldn’t ask for a better start to the Top 16 than they got Thursday night, when they defeated Alba by 31 points at Nokia Arena.
Lior Eliyahu and D’or Fischer were outstanding, Arroyo made 10 fantastic assists, and Dee Brown was impressive in his first outing with the team, scoring 11 points and making a strong contribution on defense.

The visitors opened the game with a series of three pointers that took Maccabi by surprise and gave the Germans an early lead, 9 – minutes of play.
But Maccabi came back quickly, with Arroyo setting the court on fire and, together with Eliyahu, flipping the score to 12 – 9 Maccabi with four and a half minutes left in the first quarter.
continued to throw from outside the arc and tried to slow down Maccabi’s game, but the home team kept the pace high at every opportunity.
A series of great offensive plays by Eliyahu and Casspi were answered by a three-pointer from Jenkins, who closed the gap to 23 – 20 with one minute remaining.
Determined defense by Maccabi in the final seconds led to a fast break that translated into points by Casspi and Maccabi’s biggest lead so far: 27 – 20.

The second quarter opened with tight defense by the visitors, making things tough for Maccabi in their early possessions.
But the home team kept their cool, continuing with their smooth and fast game and making use of the skills of Marcus Brown to reach a score of 35 – minutes of play in the period.
Maccabi’s offensive game was slick, and head coach Pini Gershon found the perfect time to put newcomer Dee Brown into the game, where he immediately scored a smooth three-pointer, taking the score to 40 – 24 five minutes into the quarter.
Shortly after, Maccabi relaxed a little, allowing to narrow the gap, but a 7 – 0 scoring run by the home team, including 5 points by Dee Brown and a follow-dunk by Fischer punctured the visiting team’s hopes and put them down by the biggest margin of the game thus far.
At the end of the half Maccabi led 49 – 32.

Skillful follow-through by Fischer and Marcus Brown plus tight defense by Maccabi saw the home team increase their lead to 54 – 32, three minutes into the third period.
Apart from firing shots from long range and trying to cut Maccabi off in the paint, couldn’t do much and Maccabi’s lead stayed pretty much the same, 60 - 37 with three minutes left in the quarter.
Gershon gave his starting team a rest and put in part of his second string, who were led by Yaniv Green, Tal Burstein, and Arroyo who kept up the fabulous game seen up to that point, steadily increasing Maccabi’s lead over the hapless Berliners.
At the end of the third quarter, Maccabi led 68 – 42.

Maccabi’s players continued to put on a terrific show in the fourth quarter.
The crowd thrilled to poetic passes by Arroyo and perfect finishes by Eliyahu and Green, with 3 three-pointers by Berlin spoiling the fun just a little and chipping away at Maccabi’s lead, 74 – 53 three and a half minutes into the final period.
Gershon, who didn’t want to see this outstanding victory in the making slip through his team’s fingers, subbed in strong players and Maccabi’s margin grew – Fischer, who was unstoppable under the basket, connected with Brown for a 7 – 0 run.
Maccabi kept the pace fast and furious, not letting up until the final buzzer, and the game ended with an emphatic Maccabi victory over Alba , 96 – 65.