Maccabi Electra Tel Aviv’s chances of advancing to the Euroleague quarterfinals took a hit last night (Thursday) when they lost at home to Real Madrid, 73 – 69. Arroyo was Maccabi’s top scorer with 26 points. Casspi: “We’ve got to defend our honor in our remaining games.” 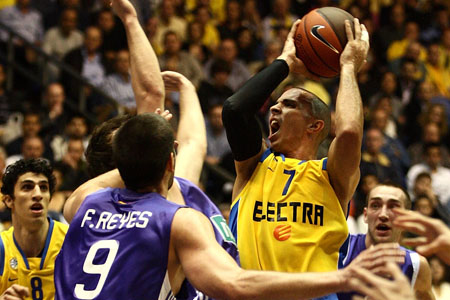 Maccabi Electra Tel Aviv put on a weak performance for most of the game on their way to a home court loss to Real Madrid.
In spite of some impressive come-backs, including narrowing the deficit to two points during the game, Maccabi was unable to take control of the game; meanwhile, dominated in every area.
Carlos Arroyo scored 28 points, Omri Casspi added 15.

After an exciting game between the Masters of Maccabi and Real Madrid (which was won by Maccabi), the celebration continued with a ceremony honoring the memory of Ralph Klein.
The ceremony, which was carried out by the two Masters teams, included the presentation of gifts to the family of the legendary coach by representatives of the two clubs.

The first quarter opened badly for Maccabi, who couldn’t seem to sink a shot, while at the other end of the court the Spaniards were on fire.
The visitors quickly went on a 10 – 0 scoring run, and five minutes into the period the score stood at 12 – 4 in favor of Real Madrid.
The only player who kept Maccabi in the game in those early minutes was Fischer, though while the shots finally started to sink for the home team, Bullock protected ’s lead.
With two minutes left in the quarter, the score stood at 20 – 13.
In spite of two baskets by Arroyo, managed to expand their lead before the buzzer, 26 – 17.

The visitors continued to put on a show at the start of the second quarter, easily overcoming Maccabi’s defense and taking advantage of their confusion on offense; wrapped up every possession with points.
A three-pointer by Pepe Sanchez put the cap on another scoring run by Real, 8 – 0 this time.
The score stood at 34 – 19 two and a half minutes into the game.
Even when Maccabi had closed the gap slightly, Madrid responded with a serendipitous three-pointer by Jeremiah Massey and took advantage of a turnover by Maccabi team captain Derrick Sharp to take the score to 39 – 23 after four and a half minutes of play in the period.
Just as the fans in the cheap seats were losing hope, Arroyo and Casspi got in the groove, chipping away at the deficit and bringing the score to 39 – 31 with three minutes left in the half.
Just as it seemed Maccabi was on the way to a full-fledged comeback, Marko Tomas scored from outside the arc and sent the teams to the locker rooms at the break with the score 46 – 35, Real Madrid.

Maccabi showed signs of continuing their comeback in the early minutes of the second half, but it didn’t take long for Real to retake control of the game.
Just like in the first two periods, Maccabi was unable to answer the visitors on offense, and after four and a half minutes of play in the third quarter, the score stood at 55 – 43.
At that point, Maccabi started playing at their usual high level: a three-pointer by Arroyo started a 7 – 0 run for Maccabi that ended with an emphatic dunk by Eliyahu, taking the score to 55 – 49 with two minutes left in the half.
Despite a missed shot by Arroyo and a call by the referees that brought down the fury of the crowd, Maccabi wrapped up the third period on a positive note; a basket by Eliyahu put Maccabi within five, 56 – 51 at the buzzer.

A basket by Marcus Brown put Maccabi within three points of Real at the start of the final quarter, but two straight three-pointers by the visitors put them back up by eight, 64 – 56 after two minutes of play.
Maccabi, especially Arroyo, got down to business, with the point guard taking charge on offense and scoring 7 straight to put the home team within three, 64 – 61 four and a half minutes into the fourth period.
Despite his efforts, Maccabi was unable to eliminate the deficit completely and Real Madrid once again took charge, dominating the boards and benefiting from a three-pointer contributed by Bullock which opened Madrid’s lead to 71 – 63 with three minutes left in the game.
Maccabi head coach Pini Gershon understood that it would take something special to pull out a victory, and called Sharp up off the bench.
The strategy seemed to work, as Maccabi applied the pressure on defense and nailed some free throws, closing to within two with 50 seconds remaining, 71 – 69.
Real missed their next shot, but Maccabi couldn’t take control of the rebound and instead sent Real to the line in the hopes of pulling out a win off a missed free throw.
Lopez nailed his shots however, effectively ending Maccabi’s season in as the game ended in a Real Madrid victory, 73 – 69.

Maccabi head coach Pini Gershon tried to explain his team’s defeat.
“A lot of things didn’t work.
We did some things in the second half that maybe we should have done in the first.
Essentially, I worried that they started the game with three-pointers, which creates a seemingly insurmountable lead, and that’s what they did.
With the ability we showed today, it would have been tough to win; possible, but tough.
We lost to a great team.”

When asked about his team’s chances of making the quarterfinals, Gershon smiled.
“We would need to beat by 80 and Alba by 90 points.
Even if we had won, we have a tough game ahead in , and , which is a better team than Real.
We maintained our dignity.
It’s possible even a victory wouldn’t have been enough.”

“Casspi needed to be our fourth big man tonight.
We wanted to dominate on defensive rebounds with Fischer and Gaines.
In the first half, we had six rebounds on their offense, and in the second half they took ten.”