Maccabi Electra Tel Aviv parted ways with the Euroleague for the remainder of the season last night (Thursday), with a 90 – 74 loss to Barcelona, who will go on to meet Tao Vitoria in the quarterfinals. Marcus Brown and Carlos Arroyo were standouts with 16 points each. Pini Gershon: “From the beginning, the goal was to reach the Top 16. No one ever said anything about more.” 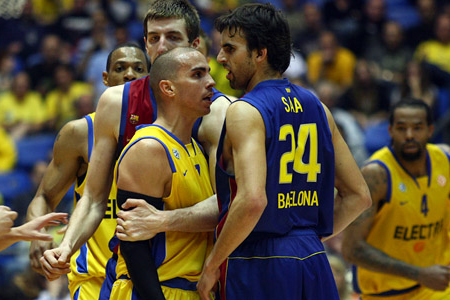 , who needed a victory to take first place in their Group, opened the game well with a three-pointer by Juan Carlos Navarro and points under the basket from David Andersen and Daniel Santiago.
But Maccabi was unfazed; a shot from downtown by Dee Brown - who had a spot on Maccabi’s starting five for the first time this season – and points by Lior Eliyahu and Marcus Brown tied the score at minutes of play.
stayed hot with two more shots from outside the arc by Gianluca Basile, but Eliyahu with six straight points kept the game even, 13 – 13 with six minutes elapsed.
By the end of the period, Carlos Arroyo and M. Brown had found their groove, giving Maccabi a 22 – 19 lead at the end of the first quarter.

Fran Vasquez’s entry into the game at the start of the second quarter gave the Spaniards a strong advantage under the basket, and they made full use of it, taking a 27 – 25 lead with three and a half minutes gone in the period.
A three-pointer by Navarro gave the visitors a 32 – 29 lead with four minutes left in the half.
Tal Burstein (who had a great game) with points and a steal briefly gave Maccabi back the lead, but Basile with yet another huge three-pointer didn’t give the fans much time to celebrate.
He then added more points to take the Spaniards’ lead to 41 – 37 with a minute and a half left until halftime.
Basile and continued to play well on offense, and took advantage of missed shots by Arroyo and Eliyahu to give a 45 – 39 lead at the break.

The visitors also owned the opening of the third quarter, with another three-pointer by Basile starting things off, but M. Brown answered with a long shot of his own, keeping Maccabi close.
Ersan Ilyasova scored from outside the arc to take the Spaniards lead up to ten and M. Brown was called for his fourth foul, causing Maccabi head coach Pini Gershon to put Burstein and Dror Hagag on the court in place of Brown and Arroyo.
The Israelis, together with Charles Gaines, played well but had some trouble handling the big men from , especially .
Every time it looked like Maccabi would close the gap, along game Ilyasova or to protect ’s 11 point lead, which remained in place at the end of the period, 66 – 55, .

Maccabi’s last quarter of Euroleague play this season opened well for Maccabi with a nice three-pointer from Omri Casspi, but Vasquez and Navarro were too much for Maccabi.
With six minutes left in the game, Basile scored his sixth three-pointer of the night to give a 15 point advantage, and more or less closed out Maccabi’s European season.
The game ended with the score 90 – 74, .

Marcus Brown, who had a great game, said, “It’s been like a roller coaster, with ups and downs.
It’s been very exciting.
We did some good things, and we’ve made a lot of changes.
We hope we’ll get some more energy.
We have to stay positive.
We have to find a way to do better on rebounds.
I hope we’ll find our way and get back to playing like ourselves.”

Carlos Arroyo, who took the loss very hard, added, “I’m very disappointed.
I’m sure we could have played better.
It’s been a very disappointing and difficult year.
I’m proud to say that I’m a part of such a great team.
We know that we’ve got things to prove.
We have some great players.”