Maccabi Electra Tel Aviv dominated Ironi Ashkelon, 92 – 69, in a game that was a cinch from the beginning. Eliyahu, M. Brown and Casspi were stand-outs. 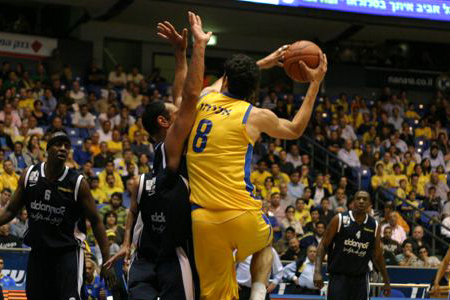 After evening the playoff series at 1 – 1 three days ago, Maccabi Electra Tel Aviv took the lead with a victory over Ironi Ashkelon at Nokia Arena.
Another victory on Sunday in will put them in the Final Four.

Both teams were ice cold coming into the start of the game, with turnovers and missed shots the main activity until the first points of the game were finally scored after two minutes had elapsed.
Maccabi defrosted first, going 10 – 0 and taking a 13 – 2 lead in the next two minutes.
thawed enough to close the gap a little off points by Cohen, bringing the score to 16 – 11 with three minutes left in the period.
Maccabi responded with another scoring run, 8 – 0 this time, which included iron-clad defense and fast-breaks that brought the score at the end of the quarter to 24 – 11.

opened the second quarter with a three-pointer from Roberts, but Maccabi quickly retook the spotlight.
In a display of fantastic basketball, Maccabi showed generosity, incredible moves and spectacular finishes on their way to a 13 – 0 run that put them up a whopping 37 – 14 halfway through the period.
In the second half of the quarter, Maccabi eased up on the talent and allowed the visitors to re-enter the game by way of the free throw line.
The half ended with Maccabi leading, 43 – 27.

The second half opened as badly as the first for both teams, until Arroyo sent a breathtaking alley-oop to Eliyahu for the first points in the third quarter.
Eliyahu continued to dunk and score nearly all of Maccabi’s points in the period, bringing the score to 51 – 32 with four minutes left in the period.
made a feeble attempt to get back in the game, but Maccabi continued to dominate, enjoying a fine display of three pointers from Marcus Brown and Tal Burstein.
The latter put the cap on a great quarter for Maccabi, scoring from outside the arc to set the score at 69 – 44 at the end of the period.

Nothing changed in the final quarter, which was played only because the rules demand it.
Maccabi played purely for the fun of it, allowing the visitors an opportunity to save face and close the gap slightly.
The clock finally ran down, and Maccabi Electra Tel Aviv defeated Ironi Ashkelon by a score of 92 – 69.
This game puts Maccabi up 2 games to 1 in the playoff series.
Maccabi heads to on Sunday to play what could be the final game in the series.