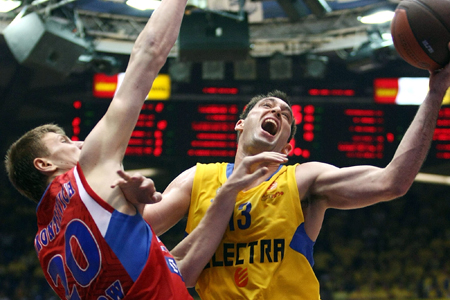 After last week’s loss in Spain and a difficult week, Maccabi filled Nokia Arena with electricity last night with an impressive defense led by Stephane Lasme, and an offense driven by Chuck Eidson and Alan Anderson that took Maccabi to a 20 point lead before the end of the first half.

Maccabi opened strong on both ends of the court, taking a quick 5 – 0 lead thanks to Lasme and Anderson, and extending it to 10 – 0 after a bucket and three-pointer from Eidson, after five and a half minutes of play.
Tight defense prevented CSKA from scoring at all until only about three and a half minutes remained on the clock.
Strong effort by Anderson took Maccabi’s lead to 16 – 7, and Eidson made it 19 – 7 at the buzzer to end the period.

Great play by Lasme and another three from Eidson put Maccabi’s lead at 26 – 11 with two and a half minutes elapsed.
More points from Lampe and a fly-by bucket from Anderson gave Maccabi a twenty point lead, 38 – 18 with just under four minutes left in the half.
At that point Maccabi toned things down, and the visitors were allowed a 7 – 0 scoring run over the next three-plus minutes.
A dunk by Anderson at the buzzer ended the half with the score 40 – 25.

Lasme continued to impress at the start of the second half, blocking shots, stealing the ball and scoring all in the first two minutes.

A shot from outside the arc by Lampe put Maccabi up by eighteen, 47 – 29.
CSKA got back into the game over the next four minutes, narrowing the gap to 48 – 35, but another steal by Eidson (he had three in the period) slowed things down for the visitors.
Doron Perkins and D’or Fischer subbed into the game and revved things up, especially with a coast-to-coast by Perkins that started with a defensive rebound and ended in a drive down the court and a pretty basket up the middle to put Maccabi up 54 – 39 with a minute and a half remaining in the quarter.
A similar drive by Perkins thirty seconds later made it 56 – 40.

The fourth quarter saw Perkins hit a three-pointer at the top of the key, followed by two steals and a spin to the basket by Anderson to put Maccabi up 61 – 42.
Eidson continued his thieving ways, with yet another steal plus bucket to set the score at 67 – 44 with four and a half remaining in the game.
Coach Pini Gershon started subbing out his starters; when he put team captain Derrick Sharp into the game, the crowd went wild.
A couple of free throws from Fish and a nice hook shot by Lampe put the polish on an impressive win for Maccabi Electra Tel Aviv over CSKA: 71 – 54.