Maccabi Electra Tel Aviv hung on to defeat Lottomatica Roma in overtime, 92 – 90 in the Eternal City. Anderson led Maccabi to victory with 27, following a mind-blowing three from Wiz which tied the game with just under 2 seconds left. 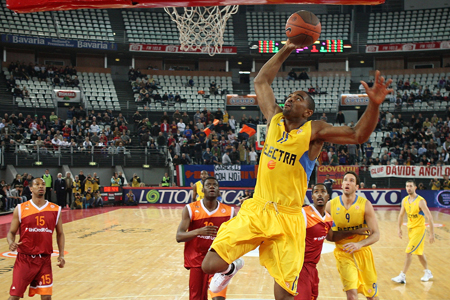 Once again Maccabi got off to a great start defensively, and Roma only succeeded in scoring after two and a half minutes.
A dunk from Lasme put Maccabi up 6 – 1 and Maccabi was looking good.
But a 9 – 0 run put the hosts on top, 13 – 8 just past the halfway mark in the quarter.
Points by Anderson, D’or Fischer and Eidson put Maccabi within two, 17 – 15 with less than a minute remaining.
Doron Perkins tied it for Maccabi with two free throws at the end of the period.

Anderson scored four straight at the start of the second quarter to return the lead to Maccabi, 21 – 17 in the first minute.
A three-pointer from Eidson in the corner, and a spin-and-shoot by Anderson, put Maccabi up by five, 26 – 21 with just under six remaining on the clock.
Roma had nine turnovers in fifteen minutes (thanks in part to the larcenous Eidson) and Maccabi led 28 – 21 off a classic dunk from Fish.

After reaching a game-high nine point lead, Maccabi watched as Roma went on a 7 – 0 scoring run and came within two, 30 – 28 with two and a half minutes left in the period.
Within two minutes the hosts had retaken the lead, 33 – 32, and Anderson hit the bench after making his third foul.
David Bluthenthal came in to do what he does best, hitting a three at the buzzer to send Maccabi into halftime with a 35 – 33 lead.

Perkins opened in the second half and had made an assist to Wiz for three in the corner within fifteen seconds.
Green also started, while Anderson and his three fouls remained on the bench.
Perkins scored to put Maccabi up 39 – 36 off an assist from Eidson, but Roma got back in the game and at the halfway mark in the quarter had retaken the lead, 49 – 41.
Anderson came into the game and hit from outside the arc, but Roma was on a roll and kept the lead for the rest of the period.
At the end of three the score was Roma 59 – Maccabi 51.

The start of the fourth quarter belonged to Wisniewski, whose seven straight points put Maccabi back in the game, 61 – 58 after three minutes.
Maccabi tightened up on defense, and threes from Guy Pnini and Anderson put the visitors back on top, 64 – 63 with four minutes left on the clock.
Points from Lasme off an assist by Anderson gave Maccabi a three point lead and capped off an 8 – 0 scoring run.
Lasme fouled out shortly after, and Anderson was called for his fourth.
Roma took advantage and went 5 – 0, retaking the lead, 68 – 66 with two and a half minutes left.
Anderson nailed two free throws to make it a one point game, 69 – 68 Roma with 26 seconds on the clock.
The Italians responded with two from the line, putting their lead at 71 – 68 with 23 left.
More foul shots, this time from Eidson, put Maccabi back within one, 71 – 70 with 19 seconds left.

Jaaber hit only one of his free throws, but Anderson’s fast break didn’t pan out.
Jaaber went to the line again, and again made only one.
Anderson flew down the court, finding Wisniewski all alone in the corner.
Wiz stepped up, making a flawless clutch three to tie the game with less than two seconds left, and sending it into overtime.

Anderson tapped in his own rebound to give Maccabi a quick lead at the start of overtime, but Roma quickly tied the game and Wiz fouled out.
Free throws by Eidson and Bluthenthal kept Maccabi in the game, and with three minutes on the clock, the game was tied again, this time at 79.
Two amazing plays by Anderson, including a bucket plus foul, put Maccabi up 84 – 80 with two minutes remaining.
Eidson made a pretty hook off the glass to increase the lead, but Roma scored to put it back at two points.
Perkins, with an offensive rebound/dunk combo made it 88 – 84, Maccabi.
Jaaber responded with a three with forty seconds left.
Perkins made a crucial drive to the basket with twenty-four seconds remaining, to put Maccabi up 90 – 87, but Winston tied it with a three pointer only three seconds later.

Two free throws by Eidson put Maccabi up 92 – 90 with enough time left on the clock for the hosts to tie or win.
The ball went to Jaaber, but superior defense by Perkins stopped one of Roma’s top scorers and gave Maccabi Electra Tel Aviv the overtime win in Rome, against the previously undefeated Lottomatica Roma.
Final score, 92 – 90.