Maccabi Electra Tel Aviv came back from a 21 point deficit, but couldn’t manage to take the lead in a loss to CSKA Moscow. Eidson was top scorer with 17 points; Wisniewski added 16 points and 9 rebounds. 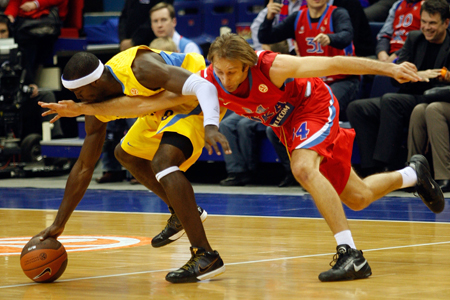 CSKA took the lead early in the game, and built on it throughout the first quarter.
Maccabi, meanwhile, got off to a slow start, and by the end of the first quarter the home team had a comfortable 28 – 11 lead.

Maccabi stayed cold early in the second quarter, and CSKA didn’t rack up too many points either in the early minutes of the period.
A three from Wiz and several trips to the free throw line helped Maccabi stay in the game, as did a classic catch-and-shoot from David Bluthenthal and a nifty assist from Alan Anderson to Lasme under the basket, but CSKA managed to keep most of their cushion intact.
Maccabi’s seven unanswered points in the last minute of the quarter (three from Eidson, two from the charity stripe by Wiz and a putback at the buzzer by Anderson) helped Maccabi finish the half on an up note, and the teams headed into the locker room with CSKA’s lead whittled down to eleven: 45 – 34.

Points early in the third quarter from Fischer and Wisniewski set the tone for Maccabi, while on defense the visitors applied the pressure.
Thanks to a jumper by Eidson and a fastbreak by Anderson off an amazing off-balance pass by Pnini, Maccabi enjoyed a 9 – 0 scoring run in the early minutes of the second half, and suddenly it was a two point game.
The Russians held on to the lead, though it never grew to more than five points.
Maccabi’s revitalized defense kept CSKA to only 13 points in the quarter, and the period ended with the home team up by only two, 58 – 56.

Maccabi continued to fight in the final quarter, but the Russians were determined to keep the lead.
Fish’s four for four from the free throw line set the stage, and Eidson’s one-handed fadeaway off the glass gave Maccabi their first tie since the early minutes of the first quarter, 66 – 66 with just under six minutes left in the game.
But a handful of Maccabi players got into foul trouble, and in the end the visitors just couldn’t manage to take the lead.
The game ended in a victory for CSKA Moscow over Maccabi Electra Tel Aviv, 77 – 72.

“We had 7 turnovers and they had 6 offensive rebounds in the first quarter, and that’s what made the difference,” explained Maccabi head coach Pini Gershon after the game.
“In the second half, our defense played great but it wasn’t enough.
We made some bad choices at the end and that made the difference.
In order to win, we needed to take control of the game earlier.”

“They opened the game strong and we passed too much,” said David Bluthenthal.
“We showed character when we got back into the game, but it wasn’t enough.
We still feel pretty confident, and there’s still a long way to go before the end of the season.”