Blu is Back: David Bluthenthal Helps Maccabi Get the Win: 98 - 91

In an aggressive and exciting away game against Gilboa/Galil, Maccabi takes home a key win thanks to Bluthenthal, who stepped up at the critical moment, and Pnini, who had an excellent first half. 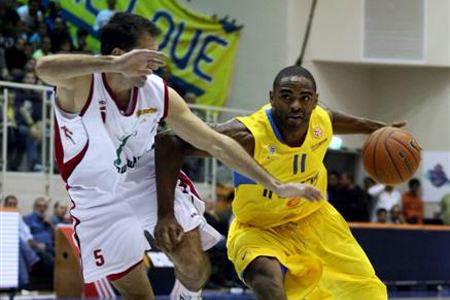 Green scored quickly to put Maccabi on the scoreboard, but Gilboa answered with six straight.
A three by Wiz got Maccabi back on track.
Two from outside the arc by Anderson, plus a three pointer from Guy Pnini and a technical foul called on the Gilboa bench, put Maccabi’s lead at 25 – 18, with two minutes left in the first quarter.
Pnini finished off the period at the buzzer with another two points: 27 – 23 Maccabi.

The score stayed close in the second quarter, and on Maccabi’s end pretty much belonged to Pnini, who scored from all over the court, including several from downtown and a nice spin-and-shoot under the basket.
Between him and Chuck Eidson (who also had some threes, including one off a nice cross-court assist from Wisniewski), Maccabi kept the score close in spite of Gilboa’s efforts to break away.
Pnini capped off his efforts with a steal, and Wiz’s three as time ran out finished the half with the score Gilboa 54, Maccabi 53.

The third quarter continued the theme, with the pace fast and the score close.
Another beautiful top of the key three from Eidson (off an assist from Pnini) put Maccabi up, 60 – 56 after a minute and a half of play in the second half.
Maccabi managed to hang on to the lead, even after Kadir decided it might be fun to try and rip Pnini’s head off in a struggle over the ball.
Doron Perkins contributed a lot of energy to the period, with rebounds, blocks and steals, not to mention two crucial free throws with two minutes left in the period.
A three from the corner by David Bluthenthal put Maccabi up 73 – 71 at the end of three quarters.

It was Bluthenthal who stepped up in the fourth quarter and dominated the hoop, scoring ten straight at the start of the period, and scoring on every shot he took.
Gilboa struggled to stay in the game, getting some help when Pnini was called for a technical foul with four minutes left in the game and the score reached 89 – 83, Maccabi.
But the home team never got that close again, as Wisniewski with a steal, and Blu with what should have been a four-pointer and an assist to Lasme under the basket put Maccabi up 96 – 85 with just under two minutes remaining.
With less than a minute left in the game, Gilboa’s Isaiah started channeling another famous Swann and started playing football, tackling Wiz and dragging him out of bounds at what would have been the 2 yard line.
The indomitable Wisniewski shrugged it off and Maccabi Electra Tel Aviv bought home the win, 98 – 91 over Gilboa/Galil.

“In the first half, it was like the summer league: who will score more.
The second half was more of a defensive game,” said Maccabi head coach Pini Gershon.
“We forced 19 turnovers from Gilboa/Galil, and I think we did a good job defending against them. They’re good at three things, and we didn’t stop them on any of them: offensive rebounds, three pointers and the transition game.
In the second half we did a better job on all parameters.”

When asked about the game, David Bluthenthal said, “It was a team effort, and we’re happy for the win.”
About Pini Gershon naming him the best Israeli player in the league, Bluthenthal responded, “Well, I thank Pini for that.
I just try to stay calm and do my job.
This is my job and I wouldn’t trade it for anything in the world.”