With their ninth straight win in the Israeli League, Maccabi Electra Tel Aviv remains in first place in the standings, thanks to excellent play by Wiz and Pnini. 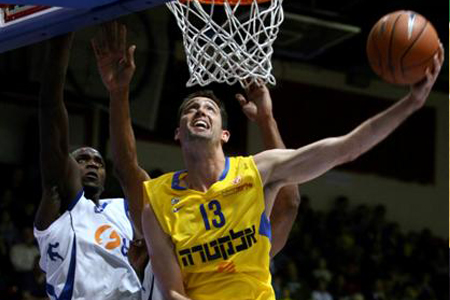 Maccabi got off to a great start, with a strong defense that made Bnei Hasharon fight for every basket.
Points by Eidson, Limonad and Green put Maccabi up 8 – 3 after three and a half minutes.
A huge one-handed dunk by Green got the Maccabi bench on its feet and put the score at 12 – 5 with five minutes remaining in the period.
A three pointer from Eidson and points from Wisniewski and Guy Pnini rounded out the quarter, with Maccabi leading 21 – 14.

The second quarter began with Doron Perkins on the court, where he immediately began to impress, first with an off-balance shot under the basket, and then with a steal + layup for a total of four quick points in the first two and a half minutes of the period.
Alan Anderson and Fish put more points on the board, then Perk buried one from downtown to put Maccabi up 34 – 20 with four and a half minutes left in the period.
Katz and Steele scored three apiece for the home team to narrow the gap, but were answered by points from Green, Anderson and Fischer.
The home team managed to chip away at their deficit, and the teams headed into halftime with Maccabi leading by six, 40 – 34.

Bnei Hasharon opened strong in the second half, but Wiz went into hyper-drive, breaking up passes, picking pockets and scoring 8 straight to put the score at 51 – 42 after three and a half minutes.
Maccabi also tightened up on defense while continuing to rack up the points, including a three from David Bluthenthal and more points from Pnini and Wisniewski.
The third quarter ended with Maccabi firmly in the lead, 67 – 52.

Points by Eidson (including an emphatic follow-dunk) and Pnini started off the final period, but the home team was determined to get back in the game.
Their eleven unanswered points closed the distance to 74 – 68 with less than four minutes left in the game.
Anderson re-injured his right hand and had to leave the game, and Pnini dominated on rebounds in the closing minutes.
The final points on both sides came from free throws.
The game ended in a 79 – 76 victory for Maccabi Electra Tel Aviv over Eshet Tours Bnei Hasharon.

“I told you before that games against Bnei Hasharon always give us trouble,” said Pini Gershon.
“I can remember the atmosphere in the locker room after games against them better than any other games. We’re going into the break with a win, that’s the important thing.
We’ll clear our heads and come back strong.”

“Olympiacos and Real Madrid both lost this week, and we have no losses in the Israeli League,” added the coach.
“We’re earning wins with our defense, and that’s important when the offense isn’t working.
I enjoy the wins.
We’re doing a very good job with what we’ve got.
In the Israeli League, there are problems because of the make-up of the other teams.”

The man of the hour was Andrew Wisniewski, who said, “We needed a win before the break.
We were leading, and although we lost our lead, we did a good job and finished with a win.
We have our ups and downs, but usually the downs only last a couple of minutes.
We’re still playing well in most of our games.”