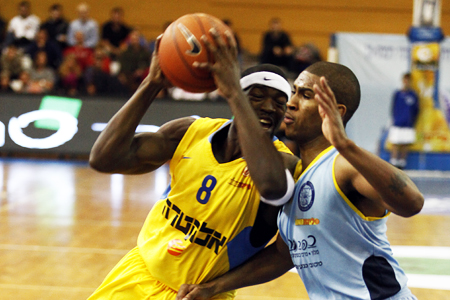 Raviv Limonad, David Bluthenthal, Andrew Wisniewski, Chuck Eidson and D’or Fischer started for Maccabi, while ’s starting five was made up of Chris Watson, Itzik Ohanon, John Sharper, Brandon Ewing and Gary Forbes.
Wisniewski scored two straight from outside the arc to tie the game at 6 – 6, a minute and a half into the first quarter.
Fish added a dunk off an alley-oop from Bluthenthal, but retook the lead off points from and Forbes, 11 – minutes.
Limonad from downtown in the next town put Maccabi up 15 – 13 at the halfway mark in the period, but the home team didn’t give up.
retook the lead with four minutes left, but points by Fischer, Pnini and Eidson put Maccabi back on top for most of the rest of the period.
As time ran out, reclaimed the lead, 24 – 22.

The second quarter got off to a slow start, with neither team scoring from anywhere but the charity stripe until four minutes had gone by (a dunk by Stephane Lasme off a steal put Maccabi up 27 – 24).
Doron Perkins dominated for the next few minutes, with a putback, free throws, an assist (dunk by Lasme) and a steal + bucket to give Maccabi a 35 – 24 lead with three minutes left on the clock until halftime.
Perk and Lasme continued to shine through the end of the half, with the cherry on the whipped cream coming from team captain Derrick Sharp with a three from the corner.
The half ended with Maccabi leading 44 – 32.

Lasme kicked off the third quarter with a reverse layup off an oop from Alan Anderson.
Guy Pnini and Anderson traded three pointers while Yaniv Green contributed two in the paint.
The home team fought to stay in the game, but was outscored by the visitors throughout the quarter.
Eidson added a three of his own, and just to round things out Perkins dumped one in from downtown at the end of the quarter, giving Maccabi a 78 – 60 lead.

A three from Perkins set the tone for the final period of the game, which was plagued by problems with the clock as well as trips to the free throw line.
Green added a nice jumper to put Maccabi’s lead at 95 – 73 with less than three minutes remaining in the game. Perkins, Fish and Limonad rounded things out to give Maccabi Electra Tel Aviv the win over Irony Ramat Gan, 101 – 79.