After being down by 15 in the first quarter, Maccabi Electra Tel Aviv stormed back to take Irony Eldan Ashkelon, big time. Anderson scored 21 points, Perkins added 20. 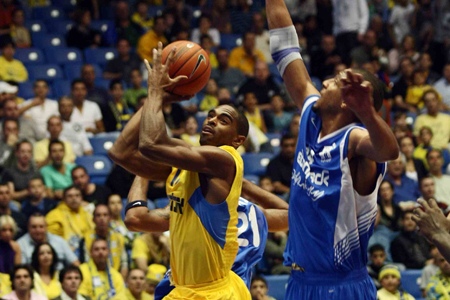 was revved in the first quarter, and took the lead early on with a trey from Baxter.
After three and a half minutes they led by a score of 11 – 4.
scored two in succession from outside the arc to put Maccabi back within one, 11 – 10, but a dunk by Baxter and a technical called on Maccabi reopened the visitor’s lead.
Substitutions by Maccabi couldn’t stop , and with just over two minutes in the period their lead had swollen to fifteen, 25 – 10.
David Bluthenthal drained a catch and shoot on an inbounds, then went on to sink two free throws and score in the paint off an assist from Doron Perkins.
A three pointer by Raviv Limonad from the corner at the buzzer closed out the quarter, with Maccabi trailing 28 – 19.

A steal by Limonad led to a layup from Perkins in the opening seconds of the second quarter, and proved to be a taste of the future as Maccabi set about taking the lead.
didn’t make it easy, with Baxter especially efficient in adding points to the visitor’s side of the board; after three minutes in the period Limonad’s second pair of free throws put Maccabi within six, 33 – 27.
A mini-hook in the paint plus free throw by Bluthenthal cut that lead to three.
dropped one from the corner to tie the score, then Perkins sank one of two from the charity stripe to give Maccabi their first lead since the first minute of the first quarter, 38 – 37 at the halfway mark in the second quarter.
The home team then got down to the business of extending their lead, and were ably supported in that endeavor by team captain Derrick Sharp, who sent home a three pointer from the right wing, making it 48 – 42 Maccabi, with less than two minutes remaining in the period.
’s stunning reverse dunk at the buzzer (he had 19 points after two periods) sent the players into halftime with Maccabi leading 52 – 44.

Baxter tried to get things going again for in the third quarter, but Bluthenthal, Perkins and Fischer, who combined for six straight points in the first few minutes, proved too much for him to handle and after four minutes, Maccabi led by eleven, 60 - 49.
Maccabi was also excellent on defense, with steals, blocked shots, defensive rebounds and all-around good guarding keeping the visitors in check.
Pnini drained a three pointer from the top of the arc with three and a half remaining in the period to make it 64 – 54.
Perkins, Fish and Limonad added points from the line, then Perk added a spinning layup and one to make it 72 – 43, Maccabi with one and a half minutes left.
Sharp added another three pointer, which was answered by Brian Tolbert, and the period ended with Maccabi’s lead at 77 – 61.

A pair of layups from Limonad and put Maccabi over 80 points early in the fourth quarter.
added a perfect alley oop to Perkins on a fast break to put Maccabi up by twenty with three minutes gone: 86 – 66.

Shortly after, Pnini picked Sneed’s pocket and then made another three pointer, making it 89 – 66.
When Pnini sank one of two from the free throw line off an unsportsmanlike call against Sales, Maccabi’s lead reached twenty-six, 93 – 67 at the halfway mark in the period.
Maccabi didn’t let up even when the game reached the so-called “garbage time” phase; Perkins in particular seemed determined to see Maccabi pass 100 points.
But it wasn’t to be, and the game ended after two free throws by Lasme, giving Maccabi Electra Tel Aviv the 98 – 80 win over Irony Eldan Ashkelon.

“Since the game ended okay, there’s no need to go into what went wrong at the beginning,” said Maccabi head coach Pini Gershon after the game.
“I hope that those things weren’t just our fault; there were things that shouldn’t have happened.
Everyone needs to take each game seriously: the coaches, the players and the referees, and there were a few things that weren’t okay.
In the first half they went to the free throw line 18 times, and there were things that I don’t want to get into here.
I think it’s harder to referee this kind of game than a close game, and that needs to be addressed accordingly.
Not all of that point difference is our fault.”

Doron Perkins, who had an outstanding game, said this about the first quarter, “You know, it happens.
Sometimes people come out a little flat.
I think we didn’t give them enough credit.
They’re a real good team,” Perkins continued, “and they can beat you, so we kicked it up and it was good.
We need to understand that every game now is preparation for the championship.”