What a Guy! Pnini Leads Maccabi to 83 – 72 Win over Bnei Hasharon

Guy Pnini dazzled the home crowd on the way to a record 26 points and a victory for Maccabi over Bnei Hasharon. Next game: against Ashkelon at Nokia 19:40 Saturday night. 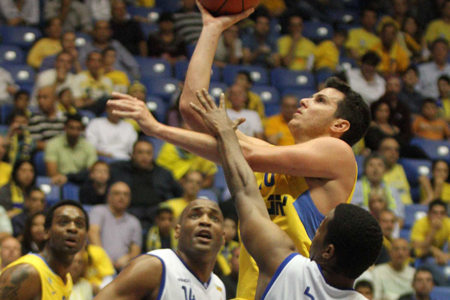 The score see-sawed in the first half of the first quarter until Limonad put Maccabi up with a shot from outside the arc to make it 9 – 7.
A three pointer from Pnini put Maccabi up for good, 12 – 9 just before the halfway mark.
Pnini sank another three pointer and dropped in two more off the glass off an assist from Fischer to set the score at 21 – 13 with just over two minutes left in the period.
Maccabi’s defense was tight and tough throughout the quarter.
sent home a pretty fade-away jumper and David Bluthenthal’s stop and pop gave Maccabi a ten point lead at the end of one, 25 – 15.

Doron Perkins showed off his moves with a steal plus assist to Pnini for the layup early in the second quarter.
Bluthenthal’s versatility was in evidence with nice moves in the paint, making it 32 – 23 with four minutes gone in the period, and Maccabi stayed alert on defense, forcing what would be the second of four shot clock violations on the visitors.
Tucker scored time and again for the Bnei Hasharon, but Perkins continued to shine with another steal plus layup of his own and points scored from mid-air in the paint to set the score at 40 – 27 with less than three minutes left in the half.
Pnini and Wisniewski added some points from the charity stripe, and a huge block by Perkins polished off the first half with Maccabi leading by thirteen, 44 – 31.

Pnini kicked off the third quarter with a putback, but then Bnei Hasharon went on an 8 – 0 run, making it 46 – minutes.
Pnini’s dunk and one got Maccabi back on track, but Shawn James did all he could to prevent Maccabi from running away with the game.
Nothing stopped Maccabi, though: Pnini drained a three from the top of the arc, and Stephane Lasme scored four straight in the paint to put Maccabi up by twelve, 60 – 48 with two minutes left in the period.
Perkins finished out the quarter with a steal/layup and a mid-range jumper to make it 64 – 48 as time ran out.

The fourth quarter opened with a catch and shoot from the top of the arc by Bluthenthal; a minute and a half later, Lasme had scored five straight to put Maccabi up by their biggest lead of the night, 72 – 52.
With such a large cushion, Maccabi let up on defense and the visitors took advantage; three and a half minutes into the period the score was 73 – 60.
Team captain Derrick Sharp came into the game and revitalized both players and fans, pulling down a rebound and draining one of his classic three pointers to put Maccabi up by fourteen, 79 – 65 at the halfway mark in the period.
Lasme scored off an assist from Perkins and blocked a shot at the other end.
Pnini’s putback of a miss by Bluthenthal finished off the scoring for Maccabi, and the game ended in a victory for Maccabi Electra Tel Aviv over Bnei Hasharon, 83 – 72.

“It wasn’t easy to come back, especially after the two losses to Partizan in ,” said game MVP Guy Pnini.
“It’s not the easiest thing, mentally, but you do it and move on.
We Israelis want to play in every game, but there are a lot of excellent players on our team.
I’m sure that as time goes on we’ll show what we can do.”
About next week’s game against rival (and his former team) Hapoel Jerusalem, the forward said, “There aren’t any real surprises there.
They won’t exactly greet me with flowers, but I’m coming to play and hoping to win.”