Hapoel Squeaks by Maccabi in the Winner Cup Final

A fantastic third quarter brought Maccabi Electra Tel Aviv back from a 15 point deficit at the half, but Jerusalem came back to life in the final period, taking the Winner Cup final, 86 – 80. 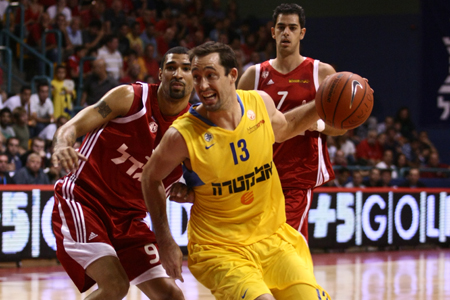 An on-fire Anderson got things started with a three-pointer and a no-look mini-oop to Fischer for a dunk, putting Maccabi up 5 – 4.
Hapoel wasn’t fazed, and answered with points from inside the paint, keeping the game close.
With three and a half elapsed on the clock, succeeded in tying the game at 8.
A pass around the back of a defender from Eidson to Fischer set up a go-ahead dunk by the center, which Fischer then followed up with an in-your-face block.
A three-pointer from Anderson with five and a half left on the clock put Maccabi up 13 – 8, and was quickly followed by yet another long one from number 11, capping off an 8 – 0 scoring run by Maccabi.
Maccabi and Anderson (who had 14 in the period) didn’t stop until the lead had swollen to 14 points, thanks to a shot from downtown by Wisniewski.
But Hapoel responded with a 7 – 0 run of their own, and the period ended with Maccabi in the lead by seven, 25 – 18.

Hapoel continued to close the gap in the early minutes of the second quarter.
After a minute and a half, the score was tied at 27.
Team captain Derrick Sharp came into the game to do what he does best, and scored a classic three-pointer from the corner, briefly putting Maccabi up 30 – 27.
But it didn’t take long to start a run of their own, and they took their first lead of the game, 33 – 30, with four and a half minutes elapsed in the period.
Maccabi continued to struggle, while all the momentum was on the side of Hapoel.
Things looked even worse when took a hard hit in the back of the head and left the court for the locker room.
An amazing last-second three by Simmons sealed the score for the end of the half: 50 – 35 to .

After reaching their biggest deficit of the night at the start of the third quarter, Maccabi made a comeback, thanks to five straight points from Pnini (a layup off a steal by Gal Mekel and a long three) which put the score at 52 – 40.
Hapoel started to take back the momentum, but were stopped by a shot from outside the arc by Eidson and a bucket by Mekel, which put the score at 57 – minutes.
Maccabi continued to chip away at ’s lead, shutting down their offense while putting on a fine offensive show of their own.
Points by Pnini and Anderson (including one off an amazing alley-oop from Mekel) narrowed the gap, until a long shot from the corner by tied the score at 59 with two minutes left in the period.
Two free throws from Green and two from Mekel put Maccabi back on top at the end of the period: 63 – 59.

Within three minutes of the start of the final quarter, Hapoel had retaken the lead from Maccabi, but were answered by a three from the top of the key by Wisniewski, who put Maccabi back up, 66 – 64.
There followed a see-saw of scoring from both sides, and with four minutes remaining the score was tied at 70.
Clutch shots by Eidson and Pnini (including three from downtown) kept Maccabi in the game.
They were answered by a three-pointer from Simmons and a miss by which was capitalized on by Thompson, and Hapoel took a six point lead with 45 seconds remaining.
Maccabi couldn’t mount a counter-attack, and took the Cup, 86 – 80.