Maccabi Electra Tel Aviv’s victory over Barak Netanya puts them one step closer to regaining the Cup after three long years. They face B’nei Hasharon in the final on Thursday. 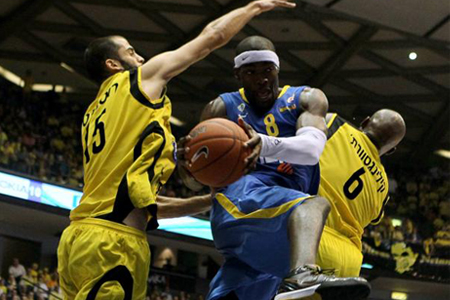 Pnini with a finger roll up the middle and Anderson with a bucket and 1 gave Maccabi an early lead, 7 – 2, but a three by Pinnock and a putback by Killingsworth tied the game at 7 after three and a half minutes.
The teams looked evenly matched throughout the period, with Pnini and Wiz keeping Maccabi in the game, while Pinnock and Asante did the same for Netanya.
A beauty from outside the arc by Wisniewski tied the game at 15 with three minutes remaining in the period. A goaltending charge on Stephane Lasme and a drive to the basket put Netanya on top at the end of the quarter, 19 – 15.

Maccabi kicked off the second quarter with a nice dish from Doron Perkins to David Bluthenthal at the top of the key for a trey.
Maccabi’s tough defense held Netanya to only two points in the first four minutes of the period, while Anderson and D’or Fischer gave Maccabi back the lead 23 – 21 with four minutes gone.
The lead changed hands a couple of times, until a steal plus layup by Wiz tied the game at 29 with two minutes until halftime.
Raviv Limonad, Perkins and Bluthenthal combined to give Maccabi the lead going into the break, 35 – 31.

Three minutes into the third quarter, Maccabi had their biggest lead of the game so far, 42 – 33 after buckets by Perk and Wiz.
Fish dominated on defense, closing off the hole under the basket and keeping Netanya to only five points in the first half of the period.
Bluthenthal from four point range put Maccabi’s lead into double digits, 48 – 36 with four minutes remaining.
Pnini and Limonad closed out a great period for the home team, with Maccabi’s lead firmly established, 56 – 40.

A fast break by Wisniewski and a gorgeous three by Pnini from the wing put Maccabi up by 21 barely a minute after the start of the fourth quarter, 61 – 40.
Maccabi continued to dominate the pace of the game; a three pointer from the corner by Anderson and a dunk by Fischer made it 68 – 47 after four minutes.
Perkins sent a couple of alley oops to Lasme, and then nailed a shot from downtown.
Limonad’s three with half a minute on the clock closed out the game, and Maccabi Electra Tel Aviv brought home the win, 81 – 65 over Barak Netanya.

Maccabi head coach Pini Gershon said after the game, “Even when the score was close, it was up to us.
It was just a matter of time.
I hope the statistics will be reversed in the final, because Shamir (Dan Shamir, coach of Bnei Hasharon) has had some great games in the finals, and he can ruin everything for us.
I know that we’re the better team and we’ll be ready for the game on Thursday, because he can really make me think.”

Assistant coach Sharon Drucker added, “Netanya is a tough team, it’s hard to compete with them on offensive rebounds, and they force turnovers.
In the second half we coped with that and things went our way.
We all know there’s one game between us and the title, and we’ll study Bnei Hasharon, just like they’ll be studying us,” said Drucker about the final.
“We need to compensate for their advantages.
I think we’ll come into the game strong, the way we like to.
Obviously, we want to take the cup.”

Point guard Doron Perkins said, “Last year, I didn’t play in the final; this year it’s going to be an interesting experience and a tough game.
It’ll be a good match-up; we had a tough game against them in their house, but we know that what’s important is how we come into the game.
I don’t know if we’re the favorites, but we have the home court advantage, which is nice.”

Maccabi guard Raviv Limonad explained, “It wasn’t such a great game to watch, but our goal was to win and make it to the final.
We played hard and with intensity on defense.
They were in the game in the first half, but in the second half we kicked things up a notch and were able to win the game.”