In a close and dramatic game in Italy, Maccabi Electra Tel Aviv lost to Montepaschi Siena in the first round of the Euroleague Top 16. Anderson was outstanding with 26 points, Perkins contributed 11. 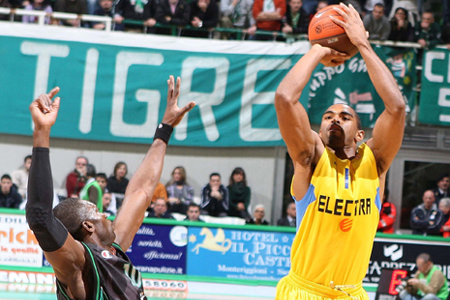 Maccabi opened strong on defense but couldn’t get the shots to drop at the other end; after four minutes the score was only 6 – 5, Maccabi.
The visitors couldn’t seem to put together an offense, but stayed tough on defense.
Siena took the lead but didn’t go far.
With just under two minutes left in the first quarter, a three pointer from Pnini put Maccabi within two, 14 – 12, but the period ended with Siena ahead 17 – 12.

An organized offense eluded Maccabi at the start of the second quarter as well, and their first points weren’t scored until three minutes had elapsed in the period, 23 – 14 with Siena leading.
The visitors guarded well, but couldn’t find the basket for much of the period.
With three minutes left in the half, Siena had taken a double digit lead, 30 – 19, but Anderson nailed the first of his five three pointers of the game to give Maccabi renewed hope.
That was followed by two great assists by David Bluthenthal to Doron Perkins under the basket, and the half ended with Siena leading 33 – 26.

Coming out of the locker room after halftime, Maccabi didn’t let the home team run away with the game.
A three pointer from Eidson was followed by one from Anderson, putting Maccabi within five, 40 – 35.
A nice jumper from Yaniv Green put Maccabi even closer and, with less than three minutes left in the quarter, Perkins nailed a shot from downtown to put Maccabi within two, 47 – 45.
Missed opportunities on offense for Maccabi and points for Siena finished off the period with the home team still in the lead, 54 – 49.

Once again Maccabi didn’t score until several minutes had passed in the fourth quarter, but when they did it was with two enormous shots from outside the arc by Anderson, and once again Maccabi closed in, 58 – 55 with three minutes gone.
Siena quickly extended their lead to double digits, but a three by Pnini and good defense by Maccabi didn’t allow the hosts to extend their lead.
Anderson drilled in a three from the corner and Bluthenthal found the net from near half court to make it 70 – 68 Siena with less than a minute remaining.
Stephane Lasme and Perkins fouled out for Maccabi, and Siena was left to walk away with the win 76 – 72 over Maccabi Electra Tel Aviv.

“We won most of the battles but lost the game,” said Maccabi head coach Pini Gershon after the loss in Italy.
“We forced them into bad zones.
We guarded well but games like this come down to the details.
We turned the ball over 14 times in the first half, and that put us at a disadvantage.
Plus, Domercant gave an excellent fourth quarter.”
About the outstanding play by Anderson, Gershon joked, “He didn’t play on Sunday, and he was the best one out there tonight.
Maybe he doesn’t need to practice.”

What’s next?
“The game between Pilsen and Real Madrid doesn’t prove anything about the abilities of either team, because some of Real’s players didn’t play,” said Gershon.
“They’re a great team, and what they don’t bring from the bench is more than we can bring, but it will be an interesting game. I hope none of the teams wins an away game, because then point differences can help us, but the home games won’t be easy.”