An exceptional game by Maccabi, especially Anderson, Eidson and Perkins, gave Maccabi their most important win of the season, 81 – 76 over Coach Messina’s Real Madrid. 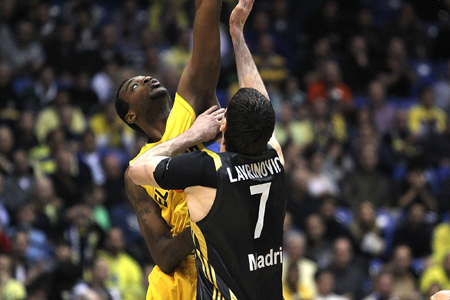 Maccabi got off to a slow start in the game, with missed shots and uninspired offense, and didn’t score until Fischer, not finding anyone open, sent home a nice little jumper with nearly three minutes gone, 5 – 2 Real Madrid.
Pnini and Fischer added points in the paint, and Eidson nailed three from the charity stripe to put Maccabi within one, 10 – 9 just past the halfway mark in the period.
Tight defense by the home team kept Real Madrid in check, and with less than three minutes on the clock, Anderson tied the score at 13.
The visitors bounced back, scoring five straight, but a dunk by David Bluthenthal once again tied the score at the end of the period, 18 – 18.

From the first minute of the second quarter, the game belonged to Maccabi.
A layup by Stephane Lasme gave the home team their first lead of the game, and Maccabi never looked back.
Anderson was on fire, scoring from outside the arc and in the paint to put Maccabi up 26 – 20 after two and a half minutes of play.
Doron Perkins fired off a long pass to Bluthenthal, who delivered a classic three pointer, putting Maccabi’s lead at eight, 30 – 22 with five and a half on the clock.
Maccabi stayed tough on defense, forcing Madrid into a shot clock violation. Eidson nailed a three from the corner, while Perkins found Lasme in the paint and dropped in a bucket of his own, making it 38 – 30 with two minutes left in the half.
With just seconds on the clock, Bluthenthal added a textbook layup to close out the half, 41 – 34 Maccabi.

The visitors scored some quick points at the start of the second half, but Anderson refused to let them get too close, sending an alley oop to Fish for a dunk and driving to the basket.
After three minutes, Maccabi led 47 – 43.
Anderson added some free throws (he was 9 of 9 from the line overall), and Maccabi continued to keep Madrid shut down offensively, bringing down two more shot clock calls on the visitors.
Perkins found Eidson under the basket, and the latter delivered a one handed dunk around his defender, while the crowd went wild.
Three more freebies from Anderson put Maccabi’s lead in double digits, 59 – 47 with two and a half minutes on the clock.
With just over a minute remaining in the period, Anderson sent a no-look ditch to Eidson, who calmly waited for his defender to fly by, then sank a neat three pointer, 62 – 50 Maccabi.
Anderson had time to deliver another assist to Eidson before time ran out, this time a crisp bounce pass in the paint for a one-handed dunk.
The quarter ended with Maccabi up by ten, 64 – 54.

Fischer kicked things off in the fourth quarter with one of his patented blocks, but Madrid remained tenacious, scoring three points before receiving a reply from Perkins with a drive to the bucket and a pair of assists.
Anderson, not to be left out, chipped in two more from the line and sent an oop to Fish with four minutes left in the game, the score 76 – 67, Maccabi.
The home team kept messing with Madrid’s momentum, with near steals and blocked shots.
Perkins nailed a huge three with under a minute left, putting Maccabi up by seven, 81 – 74.
The visitors kept on trying until the end but came up short as time ran out and Maccabi Electra Tel Aviv emerged victorious, 81 – 76 over Real Madrid.