After trailing for most of the game, Maccabi executed a classic come-from-behind victory in Spain, taking first place in Group F. They will face Partisan Belgrade in the quarterfinals. 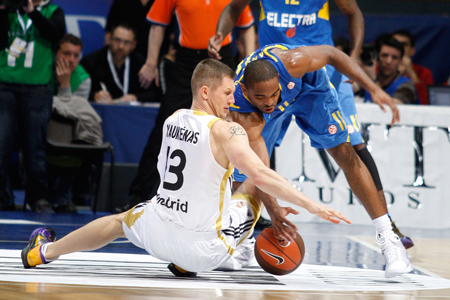 Maccabi got off to a good start defensively in the first quarter, as did Madrid; after four minutes of play the score was only 6 – 2, Madrid.
Fish was strong in the paint on both ends of the court, scoring four points and sending an assist to Eidson under the basket on offense, pulling down rebounds and blocking shots on defense.
But Madrid kept the pace to a crawl; and the quarter ended on a bucket by Doron Perkins to put Maccabi within seven, 17 – 10.

The second quarter belonged to David Bluthenthal, who kicked it off with a three pointer from the right corner. Sergio Llull dominated for Real Madrid, knocking down three baskets from outside the arc to put the home team up by sixteen, 29 – 13, with four minutes left in the half.
Anderson went up the middle for a dunk, but it was Bluthenthal who scored seven of Maccabi’s eleven points in the period.
Madrid continued to keep a tight leash on the game, while Maccabi couldn’t find the basket.
The teams went into halftime with the hosts leading 31 – 21.

The second half picked up where the first left off.
A fade-away jumper by Bluthenthal and a dunk by Fischer only helped to keep the status quo, with Maccabi still trailing Madrid by ten after two and a half minutes of play, 35 – 25.
Perk looked good in the middle of the quarter, with a drive to the basket and a steal plus layup cutting the difference to nine, but Llull answered with yet another three pointer, to give the hosts more breathing room.
Fish added a couple of put-backs to keep Maccabi in the game, but the team from Tel Aviv couldn’t get any closer than nine, and the period ended with Madrid leading 45 – 36.

It looked like the final period would follow the established pattern, but Maccabi wasn’t ready to call it quits.
Eidson scored in the first minute of the quarter, and was followed shortly thereafter by a long-range missile from Bluthenthal, putting Maccabi within six, 47 – 41 a minute and a half into the period.
Perkins drained a three from the corner and suddenly it was a four point game, 50 – 46 Real Madrid, with plenty of time still remaining.
The teams traded points for a couple of minutes, then Anderson and Lasme (off an oop from Perkins) scored in succession, and Bluthenthal delivered another bomb to tie the score at 55 with three and a half minutes left.
Felipe Reyes scored for Madrid and was answered by Lasme.
Real scored again, and again Lasme tied the score.
After Llull scored yet again, Eidson decided enough was enough and drained a three pointer from the corner, giving Maccabi their first lead of the game, 62 – 61 with just over one minute remaining.
Eidson added two more from the free throw line, but Travis Hansen responded with a clutch three with thirteen seconds on the clock, tying the score at 64 all.
With four seconds remaining, Anderson delivered two from the charity stripe to give Maccabi Electra Tel Aviv the win over Real Madrid, 66 – 64.