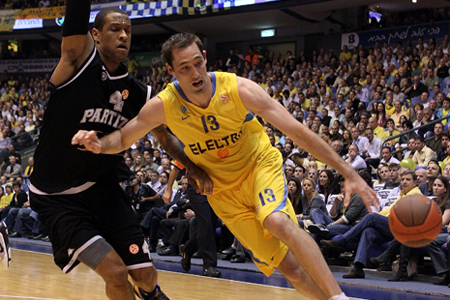 The first quarter looked like classic Maccabi – lots of energy and determination.
Immediately after Partizan copped a scant one point lead in the early minutes, Wiz executed on a stop and pop for three and Pnini scored from the next time-zone, making it 8 – 3 Maccabi after four minutes of play.
Doron Perkins scored an impossible shot under the basket plus foul to make it a ten point lead, 13 – 3, halfway through the period.
But Kecman and the Serbs weren’t about to make things too easy for Maccabi, and came back with a few from outside the arc to stay in contention. An exceptional no-look pass from Perk to Wisniewski and two from Pnini from the line put Maccabi up 18 – 9 with three and a half minutes left on the clock.
Eidson drained a three pointer from the left wing and Wiz sent home a spinning layup and it was 25 – 11, Maccabi.
Captain Derrick Sharp came into the game in the final seconds of the quarter, nailing two from the charity stripe and closing out the period with Maccabi leading 27 – 12.

While Partizan fought hard in the second quarter to stay in the game, they went several minutes without points scored from the field.
Meanwhile, Stephane Lasme and David Bluthenthal showed what they can do, with the former scoring a pretty jumper from mid-range and Blu draining a three from the top of the arc.
Lasme grabbed an offensive rebound and sent the ball to Eidson for a dunk, making it a twenty-one point lead for Maccabi, 34 – 13, after three minutes in the period.
Partizan coach Dusko Vujosevic threw player after player into the mix, trying to find a winning combination.
McCalebb added some points for Partizan but was answered by Perkins from the left wing, 41 – 22 with three and a half minutes left in the half.
After a catch and shoot by Bluthenthal from the right wing with a minute and a half on the clock, Maccabi led 44 – 27 and was 7 of 11 from three point range in the half.
Partizan scored a few more times to close out the second quarter with Maccabi leading by fourteen, 46 – 32.

Five straight points by Partizan at the start of the second half was a sign the momentum had shifted during the break.
Fish drained a jumper from the top of the key to put Maccabi’s lead back in double digits, 48 – 37 after a minute and a half of play.
Pnini scored from outside the arc and dished to Anderson for a dunk.
Another mid-range shot from Fischer gave Maccabi some breathing room, 58 – 43 at the halfway mark in the period, but then Partizan went on an eight point run, pulling within seven, 58 – 51.
Lasme scored a neat jumper from the baseline, while Perkins and Anderson cooperated on a steal plus dunk to put Maccabi up by eleven, 64 – 53 with a minute remaining.
Free throws and a three pointer put Partizan back in the game, but the quarter ended on a spin and in from Perk, 66 – 58.

The final quarter started like the one before - with Partizan scoring six straight - and suddenly it was a two point game, 66 – 64.
Maccabi’s defense lacked the toughness shown earlier and their shots more often than not failed to find the basket.
Kecman scored from three point range at the halfway mark in the period, and Partizan took the lead for the first time since the early minutes of the first quarter, 70 – 67.
Perkins tied it and Fischer scored to put Maccabi up 72 – 70, but Kecman sank another three pointer and then two from Vesely gave Partizan the lead for good, 77 – 75 with just under four minutes left in the game.

Free throws by Perkins were the last points Maccabi scored in the game, with a minute and a half remaining, and Partizan Belgrade went on to beat Maccabi Electra Tel Aviv 85 – 77.

Maccabi head coach Pini Gershon tried to explain the difference between the game’s two halves: “The momentum changed hands.
We missed a dunk and a couple of good shots, while they scored 75% from three point range, which is unusual for them.
That they scored 53 points in the second half stems from our mistakes on defense, which cost us in three pointers and excellent scoring percentages on their part.”

“In the first half, they missed wide open shots, and in the second half everything went in.
They didn’t score from the paint like they usually do.
We were able to stop them there and also on rebounds, but on the other hand, we didn’t make the switch on blocked shots and they were able to score from three point range in response.
We didn’t want to leave them open, but we got stuck on the blocks and on transition.
When the game is tied and it’s at home there’s pressure, and that has an impact.
As soon as the game got close and it became obvious there was going to be a lot of pressure, the easy shots stopped dropping.
We took some forced shots and that was because of the pressure.”

The coach revealed what his team needs to do next: “We need to play like we did in the first half so the players can get their confidence back.
They already know what they did well and what they didn’t.
I don’t think we’ll make the same mistakes we did in the second half; and in the games in Belgrade the pressure will be on them and most of their players are not all that experienced.”

“We just gave them the game,” said Alan Anderson, who scored 12 points.
“I’m only human and I miss shots sometimes.
We should have stayed aggressive and played like we did in the first half, but that didn’t happen.
We need to get back the aggression we had in the first half and keep it up for forty minutes.
That’s what helped us get to where we are now.”

David Bluthenthal, who contributed 9 points, said, “I don’t think we were effective on offense, and our defense didn’t put enough pressure on them.
We need to do what we did in the first half and play smarter on defense.”