Maccabi Electra Tel Aviv dominated the game and crushed Partizan Belgrade, 98 – 78. The series between the teams is now tied 1 and 1, and they will head to Serbia for games three and four. Bluthenthal and Wisniewski led all scorers. 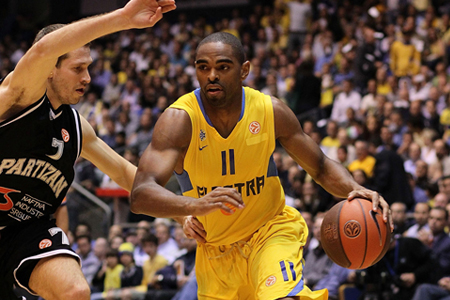 Fischer scored a quick four points early in the first quarter, but Partizan was still riding on their win of Tuesday and took a 9 – 6 lead after two and a half minutes.
Anderson tied it from outside the arc, but Maccabi didn’t manage to retake the lead for several more minutes.
Their defense was excellent, however, keeping Partizan away from the basket and forcing a shot clock violation.
A stop and pop by Anderson from the left wing gave Maccabi a 16 – 14 lead just past the halfway mark, but Partizan quickly tied the score, and then retook the lead.
Eidson dished a perfect alley oop to Stephane Lasme for a dunk that tied the game at 20, then scored the go-ahead bucket from the right side with less than a minute and a half in the period.
The game stayed close, and it looked like the quarter would end in a tied score, but then David Bluthenthal sent home a mid-range putback to put Maccabi up 26 – 24 at the buzzer.

Vesely tied the score for Partizan at the start of the second quarter, but was immediately answered by Lasme from mid-range, 28 – 26.
A steal and fast-break that ended in a Lasme dunk was negated by an unsportsmanlike call against Vesely, and tempers in Nokia Arena flared, both on the court and in the stands.
Anderson and Bluthenthal continued to work on offense, while Maccabi’s defense continued to keep Partizan in check.
A steal plus layup by Eidson put Maccabi’s lead at seven, 39 – 32 with just under six minutes remaining in the period.
Maccabi went on a 10 – 0 scoring run that included a three from Wiz on the right wing, a mid-range jumper by Bluthenthal, and a super-sonic coast to coast flight by Wiz.
Bluthenthal downed two from the charity stripe to cap off the run, and with less than two minutes left in the half, Maccabi led 49 – 34.
Partizan could only manage five points from the free throw line, while Blu, Eidson and Perk scored to finish up the period with Maccabi up by fifteen, 54 – 39.

The third quarter was kicked off with a Blu-Fish combo for a dunk that was only the start of a superb quarter for Fischer.
Maccabi’s center went on to score from the left side, then again from near the top of the key, while adding some righteous blocks to his collection.
Maccabi’s defense looked as tight and tough as in the first quarter, forcing another shot clock violation on the visitors.
Fish capped off his third quarter performance with a dunk off a hooked oop from Anderson; with four minutes and change remaining in the period, Maccabi led 66 – 49.
Doron Perkins drained a three pointer from the left side, then sent home another basket off the glass.
Wisniewski dished to Yaniv Green for a dunk, and the quarter ended with Maccabi up 73 – 58.

The two teams traded baskets at the start of the fourth quarter, with Eidson draining a three from the top of the arc to put Maccabi up by twenty, 80 – 60.
Aggressive defense by Maccabi allowed Partizan only six points in the first half of the period, but also resulted in technical fouls being called against Roberts and Pnini.
The latter bounced back nicely, sending home a three from the corner to put Maccabi up 88 – 69 with two and a half minutes left in the game.
Perk sent an alley oop to Lasme, who managed to tip in it while falling on his face.
A neat reverse layup by Wisniewski looked like the final points for Maccabi with thirty-odd seconds on the clock, but Raviv Limonad came into the game and mailed one home from a different zip code at the buzzer, and Maccabi Electra Tel Aviv defeated Partizan Belgrade by a score of 98 – 78.