Sharp and Pnini Put Maccabi in the Final Four!

Clutch three pointers by Derrick Sharp and Guy Pnini gave Maccabi the 71 – 69 victory over Bnei Hasharon and put them into the Final Four after a thrilling game at Nokia Arena. 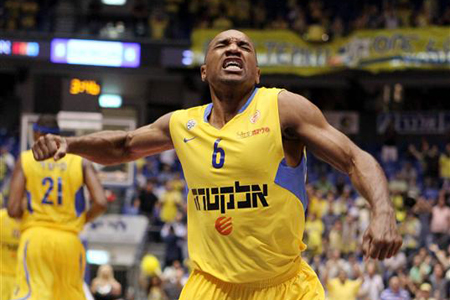 The fifth game of the best-of-five playoffs between Maccabi Electra Tel Aviv and Eshet Tours Bnei Hasharon was the most exciting of the series, which Maccabi ended up winning 3 games to 2.
The visitors’ lead stood at fourteen points in the second quarter, but Maccabi stormed back, and clutch three pointers by Sharp and Pnini at the end of the fourth period ensured that Maccabi wouldn’t finish the season earlier than anticipated.

Maccabi scored first with a mid-range jumper from Fischer, but Bnei Hasharon wasted no time in answering with points from their own center.
Pnini scored from the corner to put Maccabi up 7 – minutes, but the team wasn’t able to build up a strong lead.
At the halfway mark in the period, Fischer scored again to tie the game at 11; shortly afterwards he dumped in a putback to make it 15 – 12, Maccabi.
But James and Ron Steele kept Bnei Hasharon close, retaking the lead until Fish tied it at 17 with two and a half left in the period.
The score seesawed for the rest of the quarter, until Bnei Hasharon took the lead with seconds on the clock, and the period ended with the visitors in the lead, 23 – 21.

The pressure was intense at the start of the second quarter, and it seemed none of Maccabi’s players could find the basket, going 0 for 5 from the field in the first three and a half minutes.
Bnei Hasharon had taken a twelve point lead halfway through the period.
Once again it was Fischer who gave Maccabi points, hitting another of his patented jumpers to bring the deficit down to ten, 34 – 24 with just under three minutes left in the half.
Maccabi kept up the pressure on defense, and Eidson scored twice, with free throws from Bluthenthal and Alan Anderson also keeping Maccabi in the game.
The half ended with the visitors still leading, 43 – 32.

The second half got off to a promising start with a steal by Pnini, but Maccabi couldn’t covert and it was Katz who scored first in the third period.
A reverse layup by gave Maccabi their first points in the minutes, 46 – 34.
Three from the top of the arc by Bluthenthal were followed by a drive to the basket by team captain Derrick Sharp, and suddenly Maccabi’s deficit was cut to seven, 46 – 39.
Maccabi continued fighting hard on defense (keeping Bnei Hasharon to only 9 points in the period), including employing a full court press.
A foul by Bluthenthal was capped off with the ref adding a technical charge, and the angry crowd responded.
A time out was called while Derrick and his crew swabbed the decks.
The pause helped break Bnei Hasharon’s focus, and Tucker and Steele each only hit one of their shots from the charity stripe.
scored twice, then dished to Sharp, who tied the game at 48 with one of his classic three pointers.
Bnei Hasharon scored again, but a bomb from Doron Perkins at the buzzer cut the visitors’ lead to only one, 52 – 51 at the end of the quarter.

It was Anderson who gave Maccabi their first lead since the first quarter, but James quickly responded.
scored from downtown to tie the game at 56, two and a half minutes into the final period, but fouled out before he could contribute more.
Bluthenthal tied the score at 59 with a catch-and-shoot, and Fischer followed it with a dunk to give Maccabi the lead, 61 – 59 at the halfway mark.
A fade away by Bluthenthal put Maccabi up 63 – 61 but the lead was retaken by Ichaki, who was all alone in the corner, and it was 64 – 63 with two and a half minutes left in the game.
Sharp drained a crucial three from the left wing to return the advantage to Maccabi, 66 – 64 with two minutes on the clock.
Bluthenthal fouled out, and Pnini stepped up mailing home a special delivery: 69 – 64 Maccabi with only sixteen seconds left.
Ichaki responded and suddenly Maccabi was only up by two, 69 – 67.
Then the visitors made the fatal mistake of fouling Pnini, who calmly made both free throws with 7 seconds on the clock.
A last-second layup by Bnei Hasharon made no difference in the end, and Maccabi Electra Tel Aviv defeated Eshet Tours Bnei Hasharon to take the game 71 – 69 and the series, 3 games to 2.
Maccabi will face Barak Netanya in the semifinals next week.