Maccabi in Final After Defeating Holon 102 – 73

Maccabi Electra Tel Aviv defeated Hapoel Holon in the Israeli Lotto League semifinals by a score of 102 – 73, and will face Maccabi Ashdod in the championship Final on Thursday. Smith (19 points), Ohayon (18 points) and Langford (17 points) were standouts. 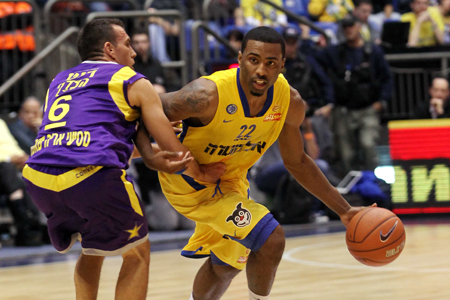 After the game, head coach David Blatt said, “We’ve worked hard all season to reach this Final, and we were able to come out at the tipoff and play the way we needed to. I think we’ll be ready for a tough game on Thursday; we haven’t forgotten that Ashdod beat us here at Nokia earlier this season.”

Game MVP Yogev Ohayon added, “We played sharp and focused from the beginning, and we played the game at our pace. But we’re still only halfway to our goal. We missed those fans that didn’t come to the game [some of Maccabi’s fans are boycotting the Final Four in protest of the method by which the champion is determined] but we support what they’re doing and we’ll celebrate with them where we can.”

Devin Smith, Lior Eliyahu, Yogev Ohayon, Shawn James and Keith Langford started the game for Maccabi. Tasmin Mitchell of Holon scored the opening points of the game but Maccabi soon took the lead; the score remained close in the early minutes with Maccabi benefiting from points by four of their starters in the first three minutes. A trey by Ohayon from the top of the arc with five minutes gone made it 14 – 11, but Holon scored at the other end to tie the score at 14 shortly after. Maccabi then embarked on what would be a 22 – 0 scoring run spanning the rest of the first and part of the second quarter. Richard Hendrix’s putback broke the ice, followed by a steal + layup by Ohayon, a catch and shoot for three by Guy Pnini (assist Hendrix) on the left side, and a stop and pop by David Blu; with less than two and a half minutes left in the first quarter the score was 23 – 14. Hendrix added a steal and a putback, Smith added a steal + slam dunk, and Smith and Langford scored from the foul line to end the period with Maccabi leading 30 – 14.

Blu opened the second quarter with one of his patented three point catch and shoots from the right wing, while a bucket and a free throw for Smith put the cap on Maccabi’s phenomenal run. Shlomi Harush finally added points to the board for Holon, making it 36 – 16 two minutes into the period. Eliyahu and Langford scored for Maccabi, but Holon continued to battle; halfway through the quarter the score was 42 – 26. Smith’s three from the left corner off a no-look dish by Ohayon was followed by points from James, and Maccabi’s full-court press on Holon forced a turnover. A gravity-defying spin and in by Langford put Maccabi’s lead back at twenty with a minute left in the half, 51 – 31, but Holon managed a three pointer in the closing seconds and the teams went into the break with Maccabi leading 51 – 34.

Bryant Dunston scored a bucket and one for Holon early in the third quarter, but Blu responded with points from downtown (assist Langford), and Ohayon offered an off-the-glass hook shot to make it 56 – 38 two minutes into the period. A stop and pop by Smith and a layup from Hendrix were followed by a mid-range fadeaway from Blu (assist Langford) that made it 62 – 45 halfway through the quarter. Holon continued to fight for points, but a one handed dunk by Hendrix (assist Blu), as well as a layup and ferocious defense by Smith kept Maccabi comfortable. Ohayon added a three from the left corner (assist Langford) and Eliyahu scored as the quarter ended: 75 – 56 to Maccabi.

Eliyahu scored two straight down low and Smith added another triple from outside the arc (assist James) to make it 82 – 56, forcing Holon to call for a time out less than two minutes into the period. James was on fire in the following minutes, racking up two straight blocks in less than thirty seconds, scoring a bucket, pulling down a rebound and making a steal that led to a fastbreak layup and 1 for Langford, all in about a minute and a half. James’ layup while double teamed was the icing on the cake, putting Maccabi’s lead at thirty, 90 – 60 just under four minutes into the period. Ohayon added a three pointer (assist Pnini), and Hendrix and Adar Harari scored from the foul line. Holon continued to play like it was a two point game, but a three by Hendrix at the top of the arc put Maccabi over the century mark, and Harari’s stop and pop was the last nail in the coffin as Maccabi Electra Tel Aviv defeated Hapoel Holon 102 – 73 in the Israeli Lotto League semifinal. Maccabi will play their final game of this long 2011 - 2012 season on Thursday, against Maccabi Ashdod, for the Israeli championship.