After the big win over Barcelona staying undefeated at home in the EuroLeague (9:0), the Yellow & Blue continue their home stretch as they'll face Roll, Messina, Scola, Rodriguez, and their friends (live on channel 55)

Lasting one of only two teams in the EuroLeague with a perfect home record, Maccabi Fox Tel Aviv will host Ettore Messina's AX Armani Exchange Milan that comes into the game in 7th place with a 10:9 record (Thursday, 21:00, live on Sport5 - channel 55).

Earlier this season, Messina's squad beat the Yellow & Blue 92:88 in Milan, thanks to Luis Scola (20 points) and Sergio Rodriguez (18), who led all reds scorers. After the win in the 9th round, the Italian team lost the next 5 straight games. In the past 5 games, Milan won 3 games losing to CSKA Moscow and Anadolu Efes.

"Milan might come into the game with a 6 game road losing streak, but that doesn't mean they aren't dangerous", Said head coach Giannis Sfairopoulos at the pregame press conference. "We respect them, and although all of their injuries, they have a big roster with quality, and their last loss will give them extra motivation. We need to be very focused, careful, and ready mentally to be tough to play against a good team. Once again, with a soldout crowd, I expect our fans to be our 6th player on the court". 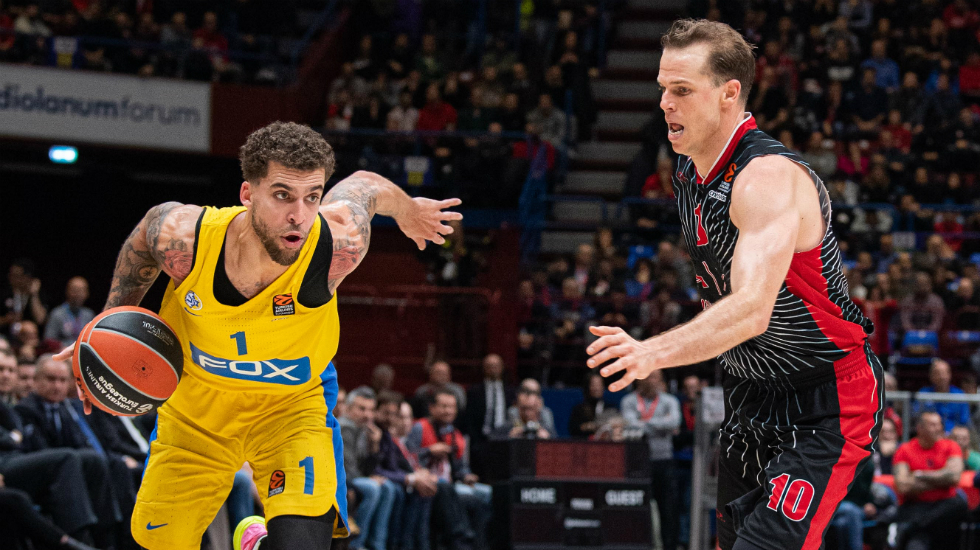 "Milan is a great team, well-coached, and every EuroLeague team is going to be tough, so opponent after opponent, you will have to bring your A-game", Told Angelo Caloiaro to reporters before practice. "We know they are a good team, and we remember they beat us at their place. We take it one game at a time, we got tomorrow's game, and we can't look at our record or standings because you can't control what everyone else does".

"We have enough fuel in the tank, I like to play back to back games, especially if we win one, we just keep the rhythm and energy going into the next one", Said Tyler Dorsey about playing two games in 48 hours. "Milan is a team that is looking for a win on the road, so it's going to be another difficult game for us. They are now more motivated after losing the last one, so they will come in a mentality that they have to get this win".

The Yellow & Blue stay unbeaten at home (10:0) with the win over the Italian squad. Wilbekin led the way with 22 points, Hunter added 14 points and 14 rebounds

Maccabi Fox Tel Aviv improved their record to 14:6 in the EuroLeague after a tough fought 69:63 home victory over Ettore Messina's AX Armani Exchange Milano. Scottie Wilbekin was fantastic in the second half finishing the night with 22 points, Othello Hunter dominated inside the paint scoring 14 points and grabbing 14 rebounds while Dorsey continued tearing it up from outside, adding 14.

Maccabi opened the game with Scottie Wilbekin, Yovel Zoosman, Angelo Caloiaro, Quincy Acy, and Othello Hunter in the starting five. Like the past two home games, the Yellow & Blue had trouble at the get-go as the visitors scored 8 unanswered points for an 8:0 lead. Wilbekin scored 5 points, Zoosman drove nicely to the basket, and an Elijah Bryant three-pointer layup cut down the lead, however, Nemanja Nedovic was in charge keeping the Italian squad up in front, 15:21 after 10 minutes.

The second quarter started similarly to the first period, Milan went up by 9 points, but then, coach Sfairopoulos called Tyler Dorsey off the bench who helped bring Maccabi within 2, 23:25. Entering the final minute, Acy minimized the lead to 1 with a corner three, and Wilbekin had a chance to give Maccabi their first lead of the half but missed. 31:32 at halftime.

Wilbekin gave the hosts its first lead of the night with a 4-point play, Dorsey extended the advantage as part of a 14:4 run to put the Yellow & Blue on top, 45:36. Coach Messina called a timeout, and Michael Roll was in charge of stopping the momentum, as Nedovic continued to be the Italians top-scoring producer reducing the lead down to 4, 52:48.

The final quarter opened in Maccabi's command that built a 9 point advantage. However, Milan didn't say the last word as Sykes responded with a triple. Maccabi put the ball in Wilbekin's hands who drilled shots from deep, scoring 17 points in the second half that gave the Yellow & Blue their 10th straight home EuroLeague win.