In a game without Anderson and a second half without Eidson, Maccabi Electra Tel Aviv strolled to an easy 88 – 63 victory over winless Hapoel Beko Holon. Wisniewski and Pnini were standouts. 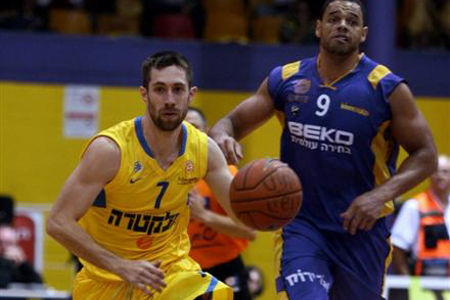 Maccabi head coach Pini Gershon gave the nod to Yaniv Green and D’or Fischer as his big men, and rounded out the starting five with Chuck Eidson, Raviv Limonad and Andrew Wisniewski.
Hapoel Holon started with Dwayne Mitchell, Titus Ivory, Yoni Nir, Avi Eliyahu and John Thomas.
Maccabi got off to a great start, especially with Eidson in the middle of things on offense, with points of his own and a nice assist to Green under the basket to put Maccabi up 6 – minutes of play. Two straight shots from outside the arc by Wiz, plus a nice mid-range jumper from Fischer and a layup by Limonad made it 17 – 10, Maccabi with three and a half minutes left in the period.
Wiz hit another from downtown while Eidson shone with a perfect alley-oop to Limonad and a one-handed dunk off an assist from Doron Perkins, to bring Maccabi’s lead to nine, 26 – 17 with a minute left.
Limonad was 2 of 2 from the charity stripe, ending the first quarter on a score of 28 – 20, Maccabi.

Perkins and Guy Pnini opened the second quarter with some pretty buckets, and combined with two straight threes from Wiz put Maccabi up 42 – 24 with just under four minutes left in the half.
Wisniewski also scored a layup + free throw, and the period closed out the way it opened, with points from Perkins (layup) and Pnini (a shot from outside the arc with seconds left on the clock).
Meanwhile, scored in single digits for the quarter, and the teams went into halftime with the score 50 – 29.

Maccabi played the second half without Eidson, who left a few minutes into the third quarter to check on his son who was ill.
Perkins showed off some nice moves while adding points to the scoreboard, but overall neither team was at its best.
By the halfway mark in the quarter, the score was 58 – 34, Maccabi.
Green, Stephane Lasme and Maciej Lampe had some good minutes, but nothing too remarkable happened in the third period until Mitchell of Holon, in a really dirty foul, shoved Pnini while he was going up to the basket.
Mitchell was tagged with a measly unsportsmanlike call, instead of being ejected.
The nastiness didn’t help , though, and the period ended with Maccabi leading 73 – 41.

The hosts managed to get within 30 points three minutes into the final period, 79 – 49, but really the game had ended long before.
Maccabi team captain Derrick Sharp came in to run the offense for the rest of the game, with his usual style and class, but it was Pnini who delivered the coupe de grace to with a long three, ending the game in yet another victory for Maccabi Electra Tel Aviv, 88 – 63.

“Our forces returned safely,” said Pini Gershon after the game.
“The most important thing is that all of our guys are healthy.”

Andrew Wisniewski, who finished with 20 points, including 5 for 5 from three-point range, said, “Yeah, it was a pretty easy game.
We had some easy shots that went in at the beginning, and we continued the momentum.
I love playing basketball, doesn’t matter if it’s the Israeli league or the Euroleague.
The most important thing with Maccabi is to keep up the rhythm, and we’ve done that leading up to Thursday night’s game against (Caja Laboral) in the Euroleague.”