Maccabi Electra Tel Aviv started the best-of-five playoff series against Eshet Tours Bnei Hasharon with an 89 – 79 loss. The next game will take place on Thursday, May 6, at Hayovel Arena. 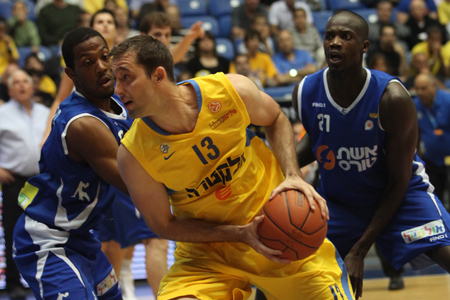 Bnei Hasharon jumped out to an early 5 – 0 lead, but were answered by points from Eidson and Fischer, making it 5 – 4 after three minutes of play in the period.
The visitors kept the dial on fast-forward, running up a 14 – 6 lead halfway through the quarter.
Pnini responded with five straight points, and Eidson drained a three pointer off a cross court bullet from Doron Perkins to close the gap to two, 14 – 12.
But Dan Shamir’s boys would not be denied, and with two minutes left in the period led by ten, 24 – 14.
David Bluthenthal and Stephane Lasme scored for Maccabi, but the home team finished out the first quarter down by eleven, 32 – 21.

The momentum stayed with Bnei Hasharon at the start of the second quarter.
Three minutes into the period, the visitors had expanded their lead to fourteen, 39 – 25.
Maccabi fought to shrink the deficit, with Eidson and Bluthenthal scoring all of Maccabi’s points for the next 5+ minutes and bringing Maccabi back to within eleven, 49 – 28, with less than a minute and a half remaining in the half.
With just under two seconds left on the clock, Pnini sank 2 of 3 from the charity stripe and the teams went into halftime with Bnei Hasharon leading 52 – 42.

Lasme closed the gap to six in the first minute of the second half, with a putback and a dunk off an assist from Eidson, 52 – 46.
Tucker and company kept on coming, while Maccabi ratcheted up the pressure on defense.
Wiz stole the ball then slipped, passing to Eidson from the floor, and number 13 finished off the play by draining a three from the left side, making it 59 – 49 after three minutes.
Pnini sank a shot from outside the arc to cut the lead to a single digit, 61 – 52, and Lasme scored six straight, including a Fish-like jumper from the paint.
Perkins dropped in a shot from the left side to make it a three point game, 63 – 60 with three and a half minutes on the clock.
The visitors kept on coming, but Maccabi’s defense kept them from stretching out their lead.
Alan Anderson contributed a steal and a drive along the baseline for a bucket and one, putting Maccabi within two, but points by Clancy finished off the third quarter with Bnei Hasharon still leading, 69 – 65.

Maccabi scored five straight points at the start of the final period to take the lead for the first time, 70 – 69 after a minute and a half.
But Bnei Hasharon soon answered, retaking the lead and keeping it.
Maccabi fought hard, employing a full-court press and good defense, but the visitors were too fired up to be denied.
A 9 – 0 scoring run by Bnei Hasharon gave them an 85 – 73 lead with less than two minutes left in the game.
Points by Anderson, Bluthenthal and Fischer weren’t enough to overcome the deficit, and Maccabi Electra Tel Aviv fell to Eshet Tours Bnei Hasharon in the first game of a best-of-five series, 89 – 79.

“Smart people learn from the mistakes of others, stupid people learn from their own mistakes,” opined Maccabi head coach Pini Gershon after the loss.
“We haven’t learned our lesson from the recent, or the distant, past.
We didn’t come to this game ready, and we paid for it.
I know what caused us to look like this, and will try to make sure it doesn’t happen again.
Bnei Hasharon came to win and played like men.
They deserve the win; we played catch up the whole game, and even when we came back we didn’t know how to take control of the game and keep the lead.”