Maccabi Electra Tel Aviv took a 1 – 0 lead in the quarterfinal playoffs of the Israeli Lotto League after defeating B.C. Habikaa 99 – 76 at Nokia Arena. 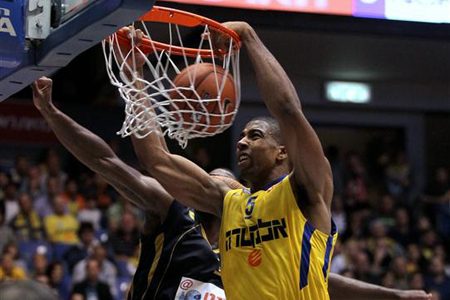 Keith Langford, Yogev Ohayon, Lior Eliyahu, Devin Smith and Richard Hendrix started the game for Maccabi. The game got off to a slow start offensively, while Hendrix grabbed three straight rebounds in less than a minute. Four minutes into the period Maccabi led 6 – 2. Habikaa’s newest player (only one month with the team) Troy Gillenwater stepped up, scoring seven straight points to put his team on top 9 – 8 halfway through the quarter. Shawn James balanced the scales for Maccabi, then Smith delivered two key buckets (one following a steal by the forward) and an assist to David Blu in the right corner to give the home team some breathing room, 17 - 12. Once again Gillenwater got to work, tying the score at 17 with two straight baskets. Blu added a deuce and a trey, and the first quarter ended with Maccabi leading 22 – 20.

The start of the second quarter was close, with the lead trading hands twice in less than three minutes and the visitors taking a 30 – 25 lead before another Blu-and-shoot (assist Langford) from the top of the arc cut Maccabi’s deficit to two. The teams traded baskets over the next few minutes, until a fake layup turned assist by James to Ohayon in the paint made it 35 – 33 Maccabi with just over three minutes left in the period. James added a smooth hook shot and a layup, while Langford scored on the give and go with James and added a three from the top of the arc to end the half with Maccabi leading 47 – 42.

Frank Robinson and Dion Dowell scored for Habikaa early in the third quarter, but James was ferocious in the paint at both ends of the court, Langford delivered another three as well as a supersonic coast-to-coast layup, and Eliyahu also added points in the paint to make it 63 – 49 halfway through the period. A time out called by the visitors didn’t help them much, as James, Ohayon, Smith and Eliyahu continued to build up Maccabi’s lead, which passed the twenty point mark as Blu tipped in a shot as the buzzer sounded, ending the quarter with the score 79 – 57.

Maccabi continued to control the game in the fourth quarter, keeping their lead close to twenty points the entire time. With three minutes left in the game young Idan Zalmanson came in and quickly scored off a dime from Guy Pnini in the paint to give Maccabi their biggest lead of the night, 93 – 67. Alon Stein contributed points from downtown (assist Ohayon) and dished to Zalmanson for two more as Maccabi Electra Tel Aviv defeated B.C. Habikaa 99 – 76, taking a 1 – 0 lead in the Israeli Lotto League quarterfinal playoffs.